Oct 07, 2019 in Spotlight by Heidi Prescott-Wieneke

In the News (CNN): Sen. Bernie Sanders’ campaign says he plans to return home to Vermont after suffering a heart attack last week, CNN reports. The 2020 Democratic primary candidate, a challenger of South Bend Mayor Pete Buttigieg, showed signs of unusual fatigue and “chest discomfort” at a campaign event in Las Vegas earlier in the week. The senator’s physicians say two stents were placed in a blocked coronary artery following a “myocardial infarction,” the medical term for a heart attack.

We asked Drs. M. Shakil Aslam and Mayank Mittal, Beacon Medical Group interventional cardiologists, for their perspectives on the procedure. Here is ‘Our Take’ on this story. 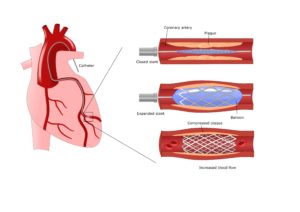 How common are blocked arteries?

What happened to Sen. Bernie Sanders is not an uncommon presentation. In fact, nearly 2 million Americans every year receive stents and majority of those patients make a good recovery. These blockages develop as a result of a slow buildup of fatty plaque in the arteries of the heart. The good new for our patients is that it is often predictable and preventable. (Mittal)

What are risk factors?

Plaque starts to develop in the coronary arteries at a young age as we start to eat. This means a healthy diet even during childhood is important. There are certain risk factors that determine how much plaque someone gets and how quickly their arteries could narrow. There are factors that can be modified, like smoking, high blood pressure, high cholesterol, diabetes, obesity and a sedentary lifestyle. There are also risk factors that cannot be modified, including age, gender and family genes. The more risk factors you have, the greater the chance you may develop severe plaque in your arteries. (Aslam)

Sen. Sanders experienced fatigue on the campaign trail. What are the warning signs?

Initially, patients are asymptomatic. But as the burden of the blockages increases, it reaches a critical point when patients start to develop symptoms that could include chest pain like Sen. Sanders, shortness of breath, passing out and fatigue. If not promptly evaluated, these symptoms can lead to sudden complete blockage of the arteries of the heart, permanent weakness of the heart muscle and even sudden death. So it’s very important for people who have these symptoms, especially those who have evidence of blockages in other arteries such as legs or neck, to see their primary care physician. (Mittal)

How important is it to seek help right away?

In the case of Senate Bernie Sanders, he was fortunate to have received prompt medical attention. He underwent a specialized heart procedure called percutaneous coronary intervention, which is performed by highly trained heart doctors called interventional cardiologists. We’re essentially plumbers of the heart. (Mittal)

What happens during coronary intervention?

Doctors puncture a small artery in the wrist or the groin to gain access and then put small plastic tubes into the arteries of the heart called catheters to inject contrast dye and find out if there is a blockage. If significant blockages are found, doctors can place really thin wires across the blockages to deliver tiny balloons to open up the clogged arteries and keep them open by placing small wire mesh tubes called stents. (Mittal)

Sometimes the blockages are very severe, or there are too many blockages, in which case the patient may need open-heart bypass surgery, like the former U.S. Vice President Dick Cheney. This is a much more invasive procedure and the recovery can be much longer, but the heart team taking care of the patient should be able to discuss and offer the patient a treatment strategy that is best for his or her heart. (Mittal)

This is a routinely performed procedure in heart centers across the nation, with minimal discomfort and relatively low complications rates of less than 1 percent in most cases. Most patients recover rapidly and can be discharged home in one to two days. They can usually return to work in one to two weeks as long as they are not doing heavy work. Decades of rigorous research and countless number of patient volunteers who have agreed to participate in research studies have allowed us to make heart disease a treatable condition with very good outcomes. (Mittal)

Not surprisingly, Sen. Sanders is already planning to attend the next debate. (Mittal)