Nov 20, 2019 in Spotlight by Heidi Prescott-Wieneke

The Beacon Children’s NICU team has long encouraged parents to cuddle skin-to-skin with their babies because of the positive effects researchers have found it has in those infants years later. 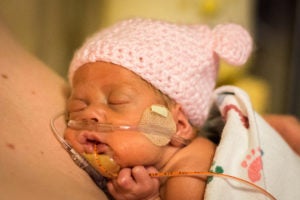 Couplet care rooms that keep moms and babies together from the start have prompted more parents to spend skin-to-skin time — more commonly known as kangaroo care — with their newborns, earlier than ever before.

And now, parents are spending more than double the time skin-to-skin with their babies than in the former, traditional NICU setting.

“We are very happy to see this,” said Beacon Children’s neonatologist Dr. Bob White. “It means our babies have more human contact and a multi-sensory experience of touch, movement, voice, smell, and visual stimuli that would not be present in the incubator. This helps those parts of the brain responsible for each of those sensory abilities to develop and mature.”

Privacy is the key difference that has improved the environment where parents spend time and bond with their babies in the critical first days of life. Parents are no longer watching and listening to the medical team moving around and caring for numerous babies in a larger, noisier unit.

They are provided a quiet, private and spacious couplet care room, as opposed to space that was carved out by curtains drawn around noisy machines and the baby’s incubator in the open unit. The noise surrounding NICU babies was studied by White and his staff during hospital planning and construction.

Beacon Children’s is one of the few Level III NICUs in the country to not only have couplet care rooms, including rooms where mothers can receive care in the same room as their baby, but also to meet the American Academy of Pediatrics recommendations for noise levels. The difference is noticeable as soon as families step into the room; noise reduction was achieved in part with walls and ceilings full of sound insulation.

“Conversation is the most common thing you now hear in the hallways, you never hear alarms. Even in the rooms, alarms are rare because we use electronic rather than audio alarms,” Dr. White said. “After you get that ‘library effect’ if the space is quiet, people behave differently, and they talk more softly. Parents are more likely to be interested in holding their babies if they are not hearing lots of alarms or other stressful noises.”

The benefits of skin-to-skin for babies as they adjust to life outside the womb have been widely published by researchers. In late 2017, the American Academy of Pediatrics published results of a long-term study; long-lasting social and behavioral effects of kangaroo care for young infants were still present 20 years later.

“The wonderful thing about this is that it didn’t take a lot of new technology or drugs, just a better understanding of what babies and their parents need, which is to be together as a family,” Dr. White said. “Hopefully this can guide efforts throughout our hospital and others to optimize the nurturing benefits that family presence and participation in care can have when their loved ones need them most.”