Jan 15, 2020 in Spotlight by Heidi Prescott-Wieneke 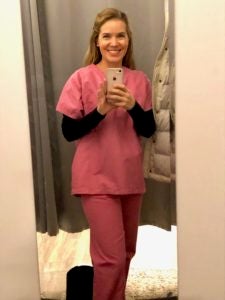 Fun fact #1: The show regularly needs and has casting calls on Facebook for “talent” to work as nonspeaking extras during taping in Chicagoland.

“I actually saw a Facebook posting that they were looking for a ‘real NICU nurse’ to film a couple of scenes, so I applied. After a couple of emails back and forth, I got a response that I was cast on episode #86,” she said.

How exciting that must have been.

Fun fact #2: Whatever you do, leave the actors alone.

“The only picture I took was of me in the dressing room in my scrubs as we had been told to be professional, don’t take pictures or try and talk to the actors,” Hooten said. Talking to actors can be distracting to them when they’re trying to focus, and taking photos of a tv or movie set can get an extra booted from taping.

Naturally, an amazing Beacon associate like Jill followed those directions. But we sure are glad she captured one image in the dressing room.

Fun fact #3: While Jill only appears in one scene, it takes the cast eight days to film an entire show.

“I had no idea how much time and work goes into the making of a TV show,” Hooten said. “There are directors, lighting crew, camera crew, props people, extras like me, hair and makeup and probably even more that I don’t know about. Everyone on the set was very professional and kind.

“I arrived in Chicago that November morning at 6:30 with it snowing like crazy. A shuttle took me to a gated entrance where all three of the shows are filmed: Chicago Med, Chicago Fire and Chicago PD. I checked in and was directed to wardrobe where I received my pink scrubs,” she said.

“A small group of us walked to the area where they were going to be filming the scene. Another person came around and gave me my props — a stethoscope, pen light, ink pen and ID badge,” she said. “Then one of the directors instructed me to stand in a spot and gave me my cue when to step in. I worked right next to the characters Dr. Noah and Nurse April. It was definitely a great experience.”