Where do you go, when the
unexpected happens?

On the outside, Greyson Young appeared to be a perfectly happy and healthy little boy who always wanted to be on the move. The nine-month-old curly blond haired boy liked eating bananas, being around his big brother and snuggling with his mom. But on the inside, something was happening that would thrust Greyson and his family into an unexpected and emotional whirlwind medical journey at Beacon Children’s Hospital.

“When our son Greyson was diagnosed with hydrocephalus, I was told we were going to be referred to a neurosurgeon three miles from our home.” 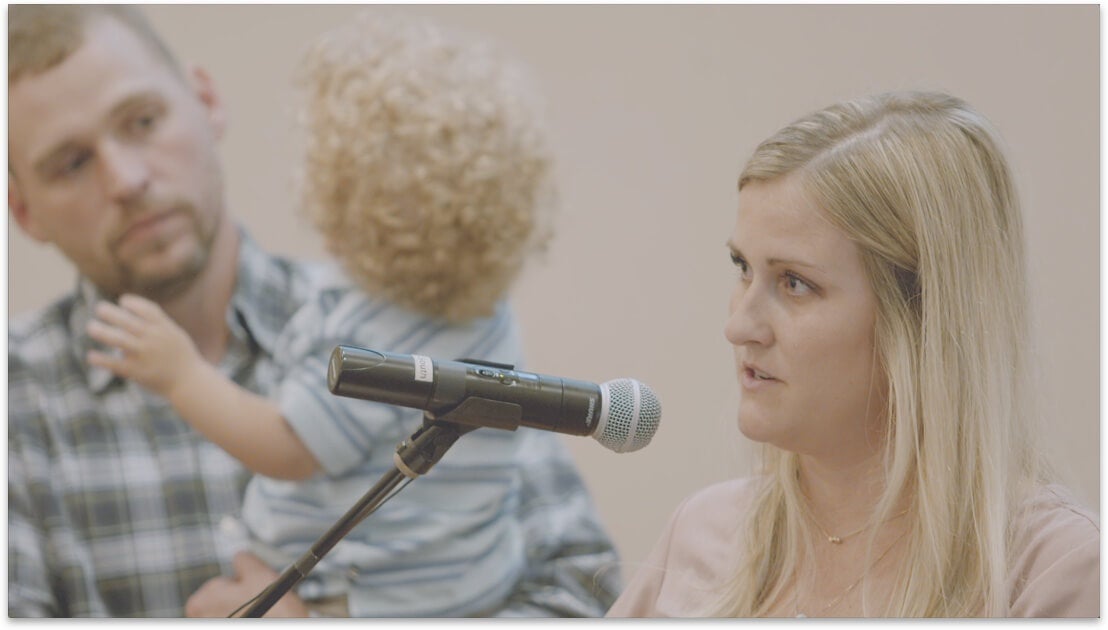 On the outside, Greyson Young appeared to be a perfectly happy and healthy little boy who always wanted to be on the move. The nine-month-old curly blond haired boy liked eating bananas, being around his big brother and snuggling with his mom.

While he was born six weeks early, Greyson hit all the milestones for his age. Having mastered crawling, he was constantly pulling himself up while holding onto couches and chairs, and taking wobbly “Frankenstein” steps. “He loved discovering new things around him and always wanted to be on the go,” his mom Ashley Young said.

But on the inside, something was happening that would thrust Greyson and his family into an unexpected and emotional whirlwind medical journey at Beacon Children’s Hospital.

Ashley Young felt her heart pounding as the pediatrician wrapped a tape measure around her head. The doctor tightened the tape just above her eyebrows and read the number aloud. Normal. That was not the news she wanted to hear.

She had hoped for some genetic explanation for what was happening with Greyson. His length and weight development were on track at six months, and again now at nine months. But his head was unusually large.

After measuring in the 93rd percentile at his last appointment, the clinicians hoped the pace at which his head was growing had slowed down. Instead, much to their dismay, it had sped up. Greyson’s head had grown two inches — more than double the normal growth rate — during that time.

He was so calm and collected and he didn’t leave any room for me to worry. -Ashley Young, Greyson's mother*

As the doctor loosened the tape measure from Ashley’s head, ruling out the chance that it was something in the family’s genes, everyone started planning next steps. The couple agreed that Greyson needed to have a CT scan as soon as possible. They squeezed him into the schedule the very next day.

The results were serious and staggering.

Greyson had what is called massive hydrocephalus. Hydrocephalus is a buildup of cerebrospinal fluid in the ventricles deep within the brain. The extra fluid was putting pressure on his brain and skull. “There was so much fluid that it was spiraling in the back of Greyson’s head,” Ashley said. “I first thought how and why is this happening to my son. Why him?”

Other than his rapid head growth, Greyson hadn’t shown any other typical symptoms, such as eyes cast downward, excessive sleepiness and seizures. “He wasn’t able to tell us verbally how he felt, so that made things worse. Was he in pain these past nine months?” she wondered. “We were very scared at the moment and scared about our future, his future. There were so many emotions and we felt so much pain.”

They were told the most common procedure for hydrocephalus is the implantation of a shunt, or tube, into the brain to drain the excess fluid to another part of the body. Ashley felt afraid not only about surgery for her nine-month-old, but also about possible infection and recurring operations. Shunts aren’t always trouble-free.

So that night, she started reading blogs and websites to learn about the options. She discovered that endoscopic third ventriculostomy would not involve shunt implantation. But from what Ashley could tell, few surgeons perform the minimally invasive procedure, and even fewer perform an ETV on babies. She wondered what the chances were of finding someone close to home to perform the surgery. And fast.

Ashley worried the longer the wait, the higher the risk of Greyson having seizures or brain damage.

But she didn’t allow herself to lose hope.

Dr. Daniel Fulkerson was still new to Beacon when he first learned about Greyson.

One of only four fully board certified pediatric neurosurgeons in Indiana, Dr. Fulkerson joined the health system in summer 2018 with the hope of keeping young patients and their families closer to home for care. Prior to his arrival, local families had to travel to Indianapolis or Chicago to see a pediatric brain surgeon.

There are actually fewer than 150 fully certified practicing pediatric neurosurgeons in the U.S.

Greyson and his parents met with Dr. Fulkerson just two days after his diagnosis. Naturally, they felt anxious about the appointment. “I immediately felt at ease after we met and started talking,” Ashley said. “He was so calm and collected and he didn’t leave any room for me to worry.”

That’s when they started talking about options.

Prior to his (Dr. Fulkerson’s) arrival, local families had to travel to Indianapolis or Chicago to see a pediatric brain surgeon.

While most neurosurgeons are trained for shunt implantations, Dr. Fulkerson explained how he specializes in and would recommend a particular endoscopic option for Greyson called an ETV, or endoscopic third ventriculostomy.

“The procedure can be technically difficult,” Dr. Fulkerson told them. “But Greyson has the ideal anatomy.” Ashley couldn’t believe her ears. Everything was falling into place. But at the same time, the process started moving at lightning speed.

Dr. Fulkerson wanted to admit Greyson right away. His eyes started “sunsetting,” or staying focused downward. He also wanted to expedite an MRI, as he planned to operate the next morning.

“I broke down,” Ashley said. “He confirmed what I was already trying to prepare myself for. And I broke down again when my husband had to tell our families what was happening. I couldn’t help my child at that moment. A hug and kiss wouldn’t relieve the fluid and pressure in Greyson’s head. That was hard.”

After getting situated in the Pediatric Intensive Care Unit, Greyson was sedated and taken back for an MRI. An hour passed, and Ashley, who works as an MRI technician, started panicking. “Dr. Fulkerson walked in and said Greyson was not waking up from the anesthesia because of all the pressure on his brain. So he had to make a small incision to relieve the pressure, which allowed him to wake up,” she said.

Dr. Fulkerson studied the results and was glad to see that Greyson made an excellent candidate for the procedure. Surgery was scheduled for 7 a.m. Saturday.

“He wouldn’t stop looking up”

“I knew it was going to be OK. I’ve never been so sure with a doctor,” Ashley said. “Dr. Fulkerson went over the procedure with us, showing us how large the incision would be and reassuring us that if anything went wrong he would go with the shunt. Granted, our baby was having brain surgery, which was heartbreaking. It was a long two-and-a-half hours when they were in the operating room.”

Using an endoscope, Dr. Fulkerson punctured the third ventricle membrane to create a new pathway for the fluid to flow in Greyson’s brain cavities, bypassing the site in his brain where the fluid was blocked. The new pathway circulates the fluid naturally, so an implanted shunt is not necessary.

I was holding him and he started looking up. The natural light caught his eye and it was amazing. -Ashley Young, Greyson's mother*

Dr. Fulkerson said the surgery exceeded his expectations. Greyson would need to stay in the Pediatric Intensive Care Unit for three days in case of infection. On the second day post-surgery, Ashley took Greyson into the bright nature-themed Children’s Hospital atrium.

“I was holding him and he started looking up. The natural light caught his eye and it was amazing. I don’t know if his vision had been impaired all this time, but he wouldn’t stop looking up. It was amazing. We are so grateful for Dr. Fulkerson.”

Almost a year later, Ashley still looks for signs of hydrocephalus. She checks the soft spot on the front of his head 10 times a day. As long as that area remains soft and hollow, it means the fluid is moving like it should be.

“Greyson is doing fabulous,” Dr. Fulkerson said. “He’s shown no symptoms and encountered no problems so far. If he goes a full year without requiring another surgery, he’s probably cured for life.”

The most gratifying part of Dr. Fulkerson’s work is seeing the joy in patients’ eyes as they heal and bounce back. He hopes that his pediatric patients and their families will find his care individualized, accessible and friendly.

“For patients and their families, it can be a scary process,” Dr. Fulkerson said. “Part of my mission is to put families and kids at ease.” 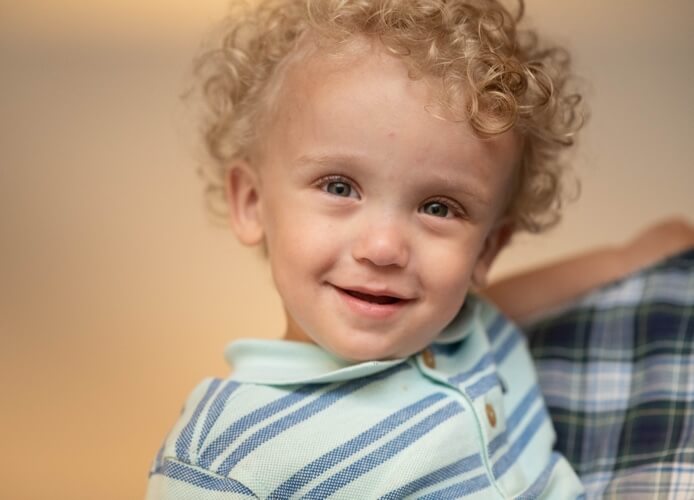 *The quotations provided in this article are part of a testimonial from the family of Greyson Young; a patient at Beacon Children’s Hospital.