“If you jump, we jump”: Memorial Hospital associates save man from jumping off South Bend bridge

Oct 02, 2019 in Spotlight by Heidi Prescott-Wieneke 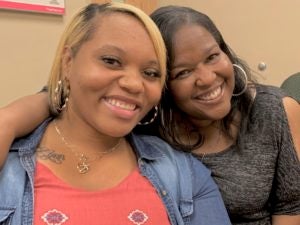 Kendrail Alfred and LaToya Groves glanced at the dashboard and saw they had three minutes to clock into work. Neither expected to be running so late. LaToya’s car wouldn’t start, so she phoned Kendrail for a last-minute ride. Kendrail was happy to help, but her morning was also frenetic.

The clock ticking, Kendrail made a hard turn onto a downtown South Bend bridge and stepped on the accelerator.

As they started over the St. Joseph River, they noticed a slender young man sitting on the ledge. His legs and feet dangled over the side and his body, slouching toward the water, tottered back and forth. On the opposite side of the street, they saw an officer climbing out of his police car.

Kendrail and LaToya looked at one another. And they knew: The man was thinking about taking his life.

Without a word, Kendrail made a sudden U-turn in the middle of the busy street and pulled her truck up behind the patrol car. The women made quick introductions with the officer and walked swiftly across the bridge together. Acknowledging he didn’t know how exactly how he would approach the man, the officer allowed LaToya and Kendrail – experienced mental health technicians at Epworth Hospital – to walk ahead and talk to him first.

“We told the officer this is what we do every day,” Kendrail said.

The man on the ledge turned and looked their way.

Stop, he shouted. So they stopped several feet away from him.

He was dressed in a black T-shirt, black pants and had on a red baseball cap. A fire engine drove over the bridge and stopped on the opposite side of the street. Over the sounds of an ambulance siren, police chatter and the rushing water beneath them, the nervous-looking man stated his intentions.

I’m about to go in, he told them, looking over the ledge.

Before you do this, let’s talk about it, LaToya said in a gentle, convincing voice.

Did they send you over to talk to me? He motioned to the Beacon Health System badges each had attached to their jackets.

We didn’t even make it to work yet, LaToya responded.

Why not? the man asked.

Because we saw you here. We turned around to talk to you. We care about you, she said.

The man considered what she said, but just as quickly dismissed it. You’re just here because it’s your job.

Without missing a beat, Kendrail and LaToya unhooked their badges and tucked them into their pockets. Then they took off their jackets and dropped them onto the ground beside them.

The number of officers continued growing. Out of the corner of their eyes, the women watched one last vehicle cross the bridge before police blocked off the street. A few officers started walking toward them when the man became agitated.

Tell the cops to back up. I’m not talking to them, the man told LaToya and Kendrail. The women motioned to the officers to stay back.

What’s going on? Kendrail asked the man in a kind, comforting voice. He turned and looked at her. He said he didn’t have anyone to talk to. Sure, he had some family, a few sisters, but he felt completely alone. He had no father figure in his life. He had no one.

But you’re all THEY have, Kendrail said about his sisters. If you come with us and get the help you need, you could be there for them.

The man stared at the water. And that’s when Kendrail looked over the ledge, too. She started sizing up the rocks and currents. She tried to figure out what places looked deeper and where she could jump in to save him. They didn’t know it at the time, but LaToya was doing the very same thing.

If you jump, we jump, LaToya told him matter-of-factly.

The man looked up quizzically, locking eyes with LaToya.

That’s right, she said. If you jump, we jump. We didn’t turn around for nothing.

He slowly pulled his legs up onto the ledge and turned to face them.

Did you ever feel like you don’t want to live? he asked.

This was it. Kendrail know it was her chance to connect with him. All her experience, everything she had been taught during the past year, came down to this moment.

Yeah, I know how you feel, Kendrail said.

She was 21 years old, living on her own, a single parent supporting her 3-year-old daughter. As she drove on a snowy road several years ago, a semi truck struck the back of her car, injuring Kendrail. She suffered a cracked vertebra, and was prescribed Vicodin for the pain. She was out of work for 12 weeks.

The bills were piling up, depression rising high, I felt alone and my job had let me go. I didn’t want to ask family for financial support because I didn’t want to be a burden on anyone. So I isolated myself from them. Everything was crashing down, she said.

One night before tucking her daughter into bed, Kendrail popped four Vicodin.

I kissed her and told her how much I loved her and how she would be great in all she does as she grows up. I told her I would always be in her corner cheering her on.

Kendrail walked into her bedroom, shut the door and turned off the light. The four pills had helped her relax and build up her courage. She grabbed the bottle, sat on her bed, and dumped the rest into her hand.

I was getting ready to throw them into my mouth when my bedroom door opened. Her daughter was standing in the doorway and she said, ‘I love you, Mommy.’ I couldn’t go through with it. In that moment, no matter what was going on, someone loved me. My daughter loved me.

So yeah, I know exactly how you feel, Kendrail said as she fought back tears.

The young man turned completely around to face them. Tears filled his eyes, too, and he asked for help. LaToya and Kendrail held onto his arms, guided him off the ledge and walked over to the officers, who took the man somewhere safe.

That marked the first time Kendrail shared her story with anyone other than her mom. “I felt ashamed and guilty, because why would I put my daughter through that? But at that moment, I wanted him to know that he wasn’t alone.” 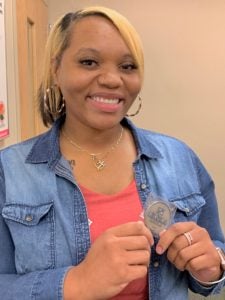 Before leaving, the women asked if one of the officers could follow them to work. They didn’t want to be penalized for being late. LaToya texted their boss and asked her to meet them in the lobby. Together, they told Pam Morrison what happened.

“I just started crying,” LaToya said. “I couldn’t believe it. Did we really just do that? Did we save that man? And at that moment I knew my purpose is to work here. I didn’t need that letter on my refrigerator any more. I tore it right up.”

That letter was a letter of resignation. Kendrail had written one, too.

Both women had been thinking about leaving their work as mental health technicians, unsure if they were making a difference to their patients. Unsure if this was the right path to be taking.

There could not have been a better sign, Kendrail said. “This was it. In all my life I’ve never had a moment like this. It was confirmation from God that this is what I’m meant to do. I wish I could tell the man on the bridge ‘Thank you.”

“We helped him and he helped us,” she said. “It showed me how much I love my work. I knew I was meant to be here and meant to help people. Everything happens for a reason. That day started as a negative but we sure turned it into a positive. And it saved all three of us.”

Kendrail and LaToya have been glowing, engaged and purpose-driven ever since that morning, said Morrison, Epworth’s manager of patient care services. “It reaffirms my belief in their ability to be incredible for our patients. I feel really proud to work with them,” she said. 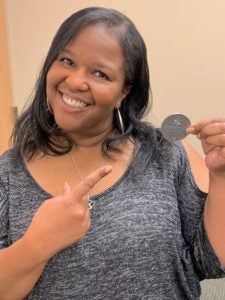 Memorial Hospital President Larry Tracy found a personal way to thank Kendrail and LaToya for their extraordinary efforts. He surprised each of them with a special leadership “challenge” coin. “It’s my way of recognizing people who go above and beyond, especially when others aren’t looking,” Tracy said.

In this case, however, people were looking, including the hospital president.

Tracy was behind the wheel of the last vehicle over the bridge before officers closed the road. He saw two women talking with a man on the ledge and hoped everyone and everything was OK. He had no idea that two Memorial associates would be late that morning because they cared enough to stop when they saw someone in trouble.

“Thank you for the awesome, awesome work to save that man’s life. I understand you were on your way to work and you had to make a U-turn in the middle of the street,” Tracy said. “But you do what you gotta do to save someone who desperately needs it. So thank you. You inspire us all.” 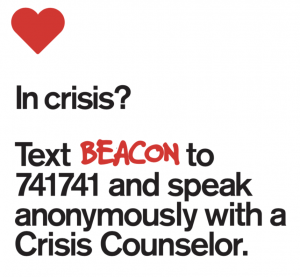 You can text BEACON to 741741 and be connected with a live, trained Crisis Counselor, who will be there to help you move from a hot moment to a cool calm.

Crisis Text Line serves anyone, in any type of crisis, providing access to free, 24/7
support and information via the medium people already use and trust: text. www.crisistextline.org