Jan 30, 2020 in Spotlight by Heidi Prescott-Wieneke

“ANY MEDICAL PROFESSIONAL PLEASE COME TO THE BACK OF THE PLANE.” 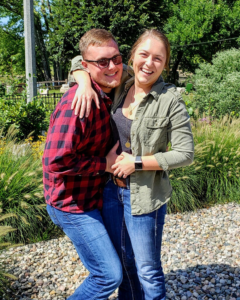 Mady Stewart, RN, BSN, who works in the Memorial Hospital Emergency Care Center, with her boyfriend, Jake Everett, an EMT with Tri-County Ambulance.

Madison “Mady” Stewart was studying for her national board exam in mortuary science when she heard the words on the overhead.

The registered nurse at Memorial Hospital of South Bend glanced at her boyfriend, Jake Everett, who was playing euchre on his phone in the seat beside her. They were about an hour into their flight that morning from South Bend to Sarasota, Florida, to visit her grandparents.

She leaned in to give Jake a hard time about a move he made in his game.

“WOULD ANY MEDICAL PROFESSIONAL PLEASE COME TO THE BACK OF THE PLANE IMMEDIATELY.”

This time, registering what the intercom was saying, Mady didn’t hesitate.

The nurse, who lives in Middlebury, unbuckled her seatbelt, jumped up and started down the aisle toward the flight attendant. In one of the last few rows of the plane, she saw an older gentleman slumped over in his seat.

She introduced herself to the woman sitting next to him, quickly explaining how she’s an emergency room nurse. Looking relieved, the woman explained how her husband had unexplainably started shaking and then lost consciousness.

“Although I didn’t witness seizure-like activity, the gentleman was what I would call postictal,” Mady said. In layman’s terms, that means ‘an altered state of consciousness’ after an epileptic seizure.

In this case, the man did not physically react when Mady called his name loudly, or move when she leaned over and rubbed his sternum with her fist, a very uncomfortable feeling for someone who is responsive.

She needed to get him out of his chair.

Mady unbuckled the man and tried to pull him into the aisle when a couple of other passengers approached, including a respiratory therapist. 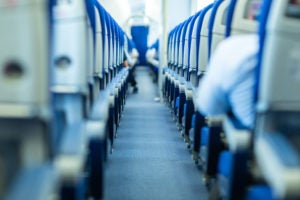 “I wanted to be able to help protect the gentleman’s airway and have him lying down in case he seized again,” she said. “But I couldn’t move him by himself.”

Her boyfriend, Jake, an Emergency Medical Technician with Tri-County Ambulance, had also come back to help. Together, the trio carefully moved the gentleman over to the aisle, where they lowered him to the floor and assessed his airway.

Jake then applied oxygen from the yellow mask that falls from the ceiling in the cabin in case the pressurization system fails, to help the man breathe.

The flight attendant handed Mady a stethoscope and a blood pressure cuff. She felt a strong bilateral pulse and the man was breathing on his own, but his first blood pressure was over 220 systolic, causing some concern, so Mady asked his wife about his medical history.

Her husband was healthy, she said, but he’d complained of a headache that morning. “I felt so grateful that his wife was super calm and helpful,” she said.

The respiratory therapist helped Mady and Jake brainstorm on what could be wrong, what could be happening, what else could they do aboard a plane, 30,000 feet in the air. 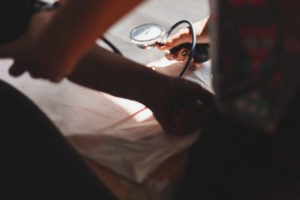 “I thought to myself, ‘Please not a spontaneous bleed. PLEASE,’” Mady recalls. The flight attendants asked what else she needed from the limited medical supplies they had on board the plane.

She inquired of other passengers if anyone had a glucometer.

An elderly lady raised her hand and quietly said, “I have one.” With her small hands shaking, the elderly woman handed Mady the glucometer and a new lancet.

The man’s glucose was 147, ever so slightly above normal.

The man now had a minimal response to painful stimuli, although he still was not responding to verbal stimuli. He was maintaining his own airway and his pupils were round and reactive.

“We were at a standstill,” Mady said. “I didn’t know what else to do.”

“I was literally just praying a long, drawn out continuous prayer to God for guidance, hoping the man would start to become responsive,” Mady said. “I feel like the entire time I was talking to God.”

She looked up at the flight attendant.

“How much longer until we land?” Mady asked.

That’s when Mady saw something out of the corner of her eye.

The man start to move.

He moved his arms first, and then he started looking around the plane.

“He was drowsy,” she remembers, “but he was responding to us.”

The man denied feeling any pain and he seemed to be moving all his extremities with ease. He didn’t remember the event at all.

“We sat in the aisle and chatted for a bit. He said he felt nauseated and became sick once,” Mady said. “With 10 minutes until landing, we were able to get him back into his seat and buckled his seatbelt.”

Everyone on the plane broke out in applause as they watched.

His wife started to cry as she told her husband what happened.

Other passengers gave up their seats for Mady and Jake so they could sit beside the man. “Heaven forbid something would happen again,” Mady said. 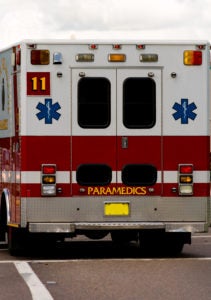 The plane landed about 20 minutes early. The flight crew had alerted paramedics so they could meet the man immediately after landing and be on hand for any further medical emergency.

“They took a quick report from me and escorted the man and his wife off the plane and onto an ambulance,” she said. “I’ve never been so happy to land.”

Everyone on the plane began applauding Mady, Jake and the respiratory therapist as they deboarded. “I felt a little embarrassed,” she admitted.

To this day, Mady has no idea what happened to the gentleman she assisted.

“If the family were to read this, I would just want them to know that I was happy to be able to help,” she said. “I would want the man to know he has an incredible wife who was extremely calm, helpful and supportive through it all.

“And I would want to know that he is OK.”

Upon her return to work at Memorial Hospital, she received praise from leadership and her colleagues.

“I would not have expected any less response from Mady,” said Candace Andreson, director of the Memorial Emergency Care Center. “She is a wonderful ER nurse who is always willing to jump in and take action.”

If you are wondering, Mady spent the following week enjoying the sunshine and warm temperatures in Florida with her family. And the flight back home to South Bend? Piece of cake.

“I don’t feel like I did anything on that flight, but I am happy I was able to assist in a small way,” she said. “I tried my best to remain calm, even though it felt like all eyes and decisions were up to me. I was really missing my ER team!”

“I feel I did an OK job remaining calm and it was a huge help that the passengers reciprocated that calmness back to me. I will never forget that flight,” Mady said.