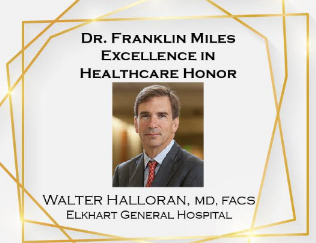 Dr. Halloran honored for leadership at Elkhart General and in community

Walter Halloran, MD, FACS, received the Dr. Franklin Miles Recognition for Leadership in Health Care on Saturday at the Business Legacy Gala in Elkhart. The honor was bestowed upon Dr. Halloran for his influence and leadership both at Elkhart General Hospital and the community.

Dr. Halloran, a world-class cardiothoracic surgeon with Beacon Medical Group, has been a member of the Elkhart General Medical Staff for 23 years. “Dr. Halloran is described by the staff as calm, compassionate, caring and devoted to his patients,” said Carl Risk, Elkhart General president. “He embraces a collaborative approach that leads to the best patient care. He expects the best and gives his best.”

In addition to his memberships, Dr. Halloran also serves on the Beacon Health System Board of Directors, and he has been a physician champion for the Thoracic Oncology Clinic, low dose lung screenings and the Transcatheter Aortic Valve Replacement (TAVR) Program. He was awarded the Indiana University School of Medicine Physician of the Year in 2016, and he is the only surgeon in the area that performs minimally invasive mitral valve and aortic valve surgery.

During the summer of 1996, Dr. Halloran began training the Elkhart General open-heart team that performed its first surgery in January 1997. By the end of that year, the team had performed more than 200 surgeries. The Center for Cardiac Care opened in 2000 under his direction.

“Dr. Halloran has the highest standards of practice and care and expects the same from all staff involved in the program, which placed Elkhart General Hospital at the top and keeps referrals coming to Elkhart,” Risk said.

He has also improved the quality of care beyond Elkhart General.

Dr. Halloran was the founder of HeartReach Michiana, a charitable organization with a mission to serve Michiana, particularly those affected by heart disease, through education, financial support and direct assistance. Since 2004, HeartReach Michiana has raised more than $700,000 to purchase nearly 500 automated external defibrillators (AEDs) for area organizations.

In addition to all Dr. Halloran has done for the medical community and region, Dr. Halloran has also served in the Army Reserve since 1988, reporting for a period of Active Duty in 2003. He also has an interest in competitive racecar driving with the Porsche Club of America Club Racing.

“Dr. Halloran is a fantastic teacher and truly cares about his community and hospital,” Risk said. “His compassion for and dedication to Elkhart is beyond compare.”