Nov 25, 2019 in Spotlight by Heidi Prescott-Wieneke 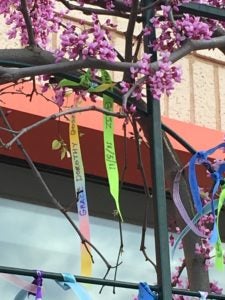 Colorful ribbons hang from a redbud tree that is planted on the patio of the Beacon Children’s NICU. The branches of this tree, which are attached to a heart-shaped frame, contain the names of babies who have been cared for Beacon Children’s Hospital team.

“The tree represents the community that we are now a part of, having had two children spend significant time in the NICU,” said Jim Gosz, a NICU graduate parent volunteer who helped lead the project.

Neonatologist Dr. Robert White, hospital staff and graduate parents discussed concepts ranging from sculptures to a lighthouse-themed project for the Level III NICU, which cares for many of the tiniest babies in the region.

Dr. White brought the idea for a ribbon tree from a remembrance tree he saw on the University of Notre Dame campus.

“We landed on the idea of doing something simple, charming and meaningful on the patio,” Gosz said. 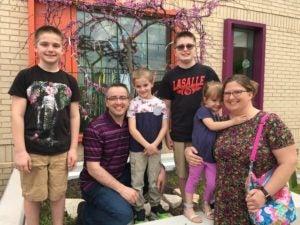 The tree, which blooms in the spring, is a symbol to parents and families that are not alone in the NICU experience. Gosz said it serves as a reminder of how many babies and families pass through the NICU. Everyone one of us has a story.

The children like my son who tie ribbons on the tree don’t remember the time they spent in the hospital as babies. But they are grateful for the opportunity to return and leave their mark — and their names — at the place where they spent the critical first days, weeks or even months of their lives. 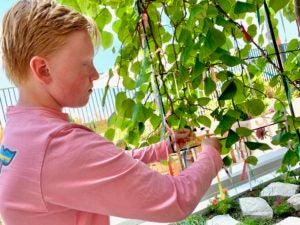 “It was special getting to write my name and the date I was born on a ribbon that will always be a part of the Children’s Hospital,” said Evan Wieneke, 14, who was born at 29 weeks and spent a month in the old NICU. “It’s a special feeling being recognized for being a preemie.”

Current NICU families and graduate families are encouraged to place a ribbon on the tree for their baby during their stay, at discharge or when they return to visit the team who cared for their child. It’s definitely a special memory to make with your child.

One ribbon can be placed on the tree per NICU baby.

Dr. White said the tree and all its ribbons also serve as a daily reminder to the entire Beacon Children’s NICU team of the lives they have had a privilege to touch. 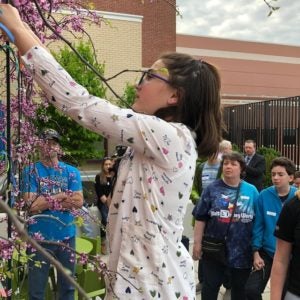 “The tree is another affirmation that the work we do here has meaning,” Dr. White said.

“It is particularly special — to us and them — when a child who was here years ago comes back to add their ribbon, I think they have a sense of how far they have come,” Dr. White said.

“In a way, this will always be their first home.”