Dec 16, 2019 in Spotlight by Heidi Prescott-Wieneke

Reana Bujalski remembers the kindness of Beacon Children’s Hospital’s music therapist on one of the darkest days of her life. 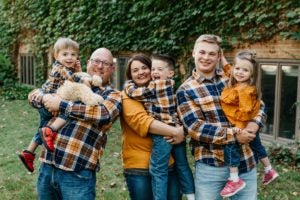 From left: Nicoli, holding a bear in memory of his brother, Jacob; Adam, Reana, John, Aidan and Charlotte.

After delivering triplets more than 10 weeks early, doctors told the Goshen mom that the lungs of her son, Jacob, were far less developed than that of his brother and sister.

Despite the prenatal steroids Reana had received, Jacob also developed bleeding in his brain. The couple realized all they could do is make their premature son as comfortable as possible until he gained his “angel wings.”

Hours before Jacob took his last breath, Cambrae Fox met the Bujalski family in the Beacon Children’s Hospital Neonatal Intensive Care Unit. Unlike the role of traditional medical staff, music therapists use song as a treatment tool. Music can also provide comfort — and lasting memories to families of dying patients.

Cambrae held the end of a special digital stethoscope to Jacob’s chest and captured a recording of his heartbeat. Later, back in her office, she set it to a Joey + Rory country song and gave the family the treasured recording. “She was our silent hero that day,” Reana said. “It’s the small keepsake that means the most.”

In the weeks that followed, Cambrae visited the surviving siblings Charlotte and Nicoli two to three times a week in the NICU. Sitting opposite the parents as they cuddled their newborns skin-to-skin, she would start a session by softly fingerpicking on her guitar. If the babies were soothed by the music, Cambrae would hum and then sing “Twinkle, Twinkle, Little Star,” “You are my Sunshine,” or another lullaby or children’s song as mom and dad joined along.

“She even recorded us reading stories and singing songs for Charlotte and Nicoli to have when we weren’t there,” Reana said. “Music therapy is an amazing thing and I’m so beyond thankful for Cambrae and the amazing person that she is.”

Music therapy sets Beacon Children’s Hospital apart from other hospitals because this service gives parents another opportunity to positively interact with their baby, and help their newborn grow and develop.

Research has shown that music therapy not only helps calm and relax NICU babies, but it also supports the stabilization of heart rate, respiratory rate and oxygen saturation. Cambrae, who is board-certified and an accomplished musician, combines singing, rocking and massage to teach infants to tolerate their environment, gain more weight and go home faster.

“Music therapy is an important component to stimulate brain development in preterm infants,” said Dr. Robert White, who cares for many of the smallest babies in the region at Beacon Children’s Level III NICU. “It can be calming during times of stress, but even at rest or during sleep, a premature baby’s brain is rapidly developing and learning.”

Erica Gunn of Nappanee thought music therapy was a great way to connect with her premature son, Kase. She learned the importance of gentle touch, music and language exposure and other sensory stimulation for her premature baby. Her favorite lullaby to sing to Kase with Cambrae was “Hush, Little Baby.”

“I think ‘peaceful’ is the best way to describe how music therapy made me feel,” Erica remembers. “For Kase, I think it made him feel safe, which, in my opinion, is exactly what he needed.”

Cambrae also brings music and song into the Pediatrics and Pediatric Hematology/Oncology units for older children. These patients can play music on a variety of instruments: drums, shakers, bells, xylophone and ukulele. It gives them the chance to express themselves, reduces anxiety, establishes a sense of normalcy and empowers them in an environment where they may feel they have no control.

“What I’ve learned from these babies is not music-related at all, but simply how strong and resilient the tiniest patients can be,” Cambrae said. “With the help of the entire care team, these babies are able to overcome what appears to be insurmountable obstacles sometimes to find their way home.”