Jan 07, 2020 in Spotlight by Heidi Prescott-Wieneke

CNN this week reported how the U.S. is on track for one of the worst flu seasons in decades: https://www.cnn.com/2020/01/03/health/flu-week-52/index.html. We asked our Infection Prevention manager for her perspective on the season so far and what we can expect.

OUR TAKE: The worst is yet to come.

Flu activity is widespread across the U.S. and will continue to increase for several more weeks across the country as well as here at home in Indiana and Michigan, said Kelly Jolliff, Beacon’s manager of infection prevention.

While the worst of this flu season may still be ahead of us, flu is not the only virus of concern for area residents. Influenza-like illness has been steadily increasing for several weeks nationwide, and even longer in the greater South Bend-Elkhart area.

Influenza-like illness is a temperature of 100 degrees Fahrenheit or greater, coupled with a cough and/or a sore throat.

The majority of respiratory viruses circulating are due to cold viruses outside of flu, including respiratory syncytial virus (RSV), human rhinovirus/enterovirus, and coronavirus with Influenza B. At the same time, however, Influenza A activity is steadily creeping up, according to www.syndromictrends.com.

The Centers for Disease Control has reported more than 2,900 flu-related deaths and over 55,000 hospitalizations this flu season, through Dec. 28, across the country.

Beacon’s hospitalization rate due to influenza, however, remains lower than previous seasons, at least to date, Jolliff said.

“About half of those patients who have been hospitalized due to flu are people who have not been vaccinated for flu,” she said. Beacon has not yet seen a high severity of illness due to flu; however, the burden of RSV in both adult and pediatric patients at Beacon has been significant.

Is this flu season shaping up to be the most deadly in decades as the CNN reports suggests? Possibly, Jolliff said.

“Influenza is always difficult to predict, however with an early start than normal in our area, there is cause for concern,” Jolliff said. This season is unusual, not only because of the early start, but also because the predominant flu strain is Influenza B. 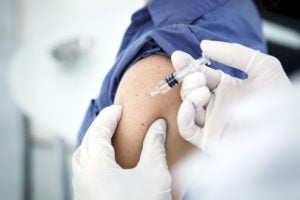 In the past, Influenza B used to be associated with less severe symptoms except for in children, and more prevalent toward the end of the flu season.

The best way to protect against the flu is seasonal vaccination. It is not too late to be vaccinated, Jolliff said. Even if you are vaccinated and get the flu, you are less likely to develop severe symptoms and die from flu related complications.

Jolliff said you can also protect yourself from several of the other cold viruses circulating by adhering to the 3 Cs: