Tomas Howard, a Memorial Hospital project lead, describes in his own voice his coming out experience and what it means to work at Beacon Health. His is one of the stories we are sharing during Pride Month, as we spotlight LGBTQIA+ associates.

To be honest, I didn’t really have a coming out, I was pushed out.

As far back as first grade, I can remember I was “different” than all of the other boys and never really fit in. I pretty much knew I was gay, and knew what it meant, but at the same time I also knew that it was not socially accepted at the time, and I should keep everything to myself. 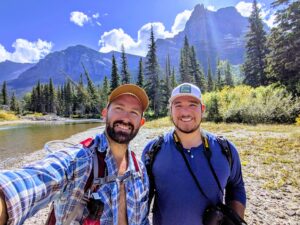 Which is basically what I did. I kept every thought, emotion and feeling I had to myself, and accepted the bullying and name calling I endured on a daily basis. I later on had a few close friends who weren’t completely ashamed of my situation, but I was pretty much a recluse, and stayed in my own little world, in my own little town in South Texas, until I was about 16 when I was practically “pushed” out of the closet by my older brother.

You see, when you have a very popular older brother who attends the same school as you, there tends to be rumors that get around about his younger brother being “different.” So of course, he relayed those rumors back to my parents, who then decided to have a family “discussion” to address them.

I knew it was coming and I knew what the “discussion” was going to be about so I had to tell myself to stay strong, put on a confident face and be ready to get kicked out of the house at any given moment.

At that time, I was 16, and luckily had one amazingly supportive friend Christina, who also knew what was about to happen, and who had an amazingly supportive set of parents, who offered to let me to stay with them, if and when my parents were going to kick me out of the house. This was just the reality of the situation 20 years ago.

And sure enough that’s what happened. My parents gathered me and my other brothers around and asked me, “We hear you like boys, is this true?”

I held my head high, took a deep breath, and replied, “Yes.”

I then exhaled, and prepared for the inevitable backlash.

My mother did not take it well. She wanted me out of the house immediately. This was only because she was too worried about what “other people” would think of her son — the family and others — especially in a small country town in Texas. She didn’t take the time to understand and ask what I was going through.

My dad had to calm her down, because in her mind she thought me coming out was the worst case scenario. This meant that I was going to be wearing makeup and dresses to school, when in reality I would be the same son she had all along, except I would bring home and introduce them to my boyfriend, instead of a girlfriend. That’s all.

On the flip side though, my Dad replied, “It’s all good Tomas, I had my suspicions, but I will still love you either way.” It was the biggest relief I’ve ever felt in my life, and I still tear up thinking about it right now.

My mother eventually calmed down, and it took some time for her to come around, but it was just the built-up fear she had for me as I would navigate life later down the road. She knew it would be harder for me, given the societal pressures I would face, but I wanted to prove her and everyone else wrong.

I knew my self-worth, and I knew that this one aspect of my life was not going to define me as a person. I had so much more to accomplish and prove and I wasn’t going to let this facet of my life bring me down, or discredit me as an individual.

There are so many fears that go through people’s minds when having to face the reality of their sexuality, but I’m so glad to see how far we have progressed as a society in the past 20 years. At the same time, even after being out for over two decades, it’s hard to break the mental toll, and Post Traumatic Stress Disorder of my closeted life before.

To this day, I still keep up my defensive guard, and don’t let people in as easily as others. I’m a tough egg to crack, but it’s hard for me to break a defense mechanism I’ve used for so long.

But every day gets better, and I have a loving and supportive husband, friends and family who truly support me. Because at the end of the day, that is one of the main things anyone who struggles with their sexuality needs: support.

I worked for a Fortune 40 company for over 15 years and was never really open about my personal life because I lived in another state where you could literally be fired for being gay. So even when co-workers would ask about how my weekend went, I always had an additional level of stress and anxiety having to immediately formulate a politically correct version of what I actually did that weekend that didn’t include my “husband,” or some “gay event” I went to.

But being able to work for an organization that doesn’t care about who I love or who I choose to marry, allows me as an employee to deliver my best performance forward. Most recently, being supported by Beacon when my husband and I decided to foster children was such a relief and made an already stressful situation less of one.

I truly thank Beacon for taking a step in the right direction to fully support their employees. Not only talking the talk, but walking the walk. As an officer of the Beacon Pride Associate Resource Group, now I can help facilitate and initiate the change that I want to see in the world, both from a patient perspective, and an employee perspective.

My coming out story is only one of millions on a yearly basis, but I hope that it can be a story of support, a story that I would have liked to hear when I was a scared, closeted 16-year-old who mustered up the courage to not let a social taboo stop me from pursuing what I wanted to accomplish in my life.