Less than 48 hours after surgery to remove a tumor compressing her spine, Vanessa Miller was walking around Beacon Memorial Hospital.

Before she started experiencing numbness and partial paralysis in her hand, she looked up gymnastics routines on YouTube and taught herself how to perform them. Vanessa also loves wrestling, and would act out the routines she watched on WWE broadcasts.

Adrienne figured the numbness in her eight-year-old’s hand was a pinched nerve from her favorite hobbies. But she wanted to be sure. “I’m a worrywart,” Adrienne says. “I think of the worst-case scenario.”

Not much later, Vanessa began walking with a slight limp. At that point, Adrienne knew it was more serious. 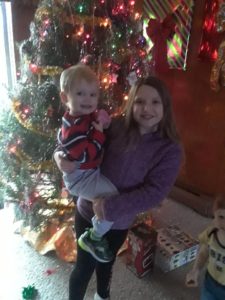 After consulting a doctor and not finding the answers she was looking for, Adrienne started asking around for a second opinion. One of her coworkers mentioned she had multiple back surgeries at a Beacon facility and always had a positive experience.

Dr. Daniel Fulkerson, one of only four fully board-certified pediatric neurosurgeons in Indiana, met with the family to discuss Vanessa’s case. “I looked him up on the internet to read more about him,” Adrienne said. “To find out he came from Riley, and he’s been doing this for over 20 years gave us comfort.”

“We were so happy with him,” Adrienne explained. “He never made me feel like I was asking a stupid question, even if I was asking the same question over and over.”

Beacon’s top-notch Neurosurgery team scheduled an MRI for the next week. But when Vanessa encountered new problems, Nurse Practitioner Natalie Hauser asked Adrienne to bring Vanessa to the ER for an emergency MRI. “I kid you not,” Hauser said. “she walked in the door and was evaluated immediately and then in MRI within maybe an hour at most. I just always have thought that was amazing how quickly the ER, MRI, PICU and Neurosurgery teams were able to get things coordinated and rolling.”

He never made me feel like I was asking a stupid question, even if I was asking the same question over and over. -Adrienne Miller, Vanessa’s mother*

The MRI returned news the family had been dreading: Vanessa’s spine was almost completely compressed by a tumor.

Dr. Fulkerson removed the tumor the next day. Just hours after she awoke from the surgery, she was out of bed and exploring her room, talking with her family and on her way to being a kid again.

In the weeks after her surgery, Vanessa worked with Beacon Physical Therapy continue her return to normal life. “We thought she would need inpatient rehab, but she got stronger and stronger each day,” Hauser said.

She wasn’t able to wrestle or perform acrobatics anymore, but she loves fashion and watching YouTube, so she turned her focus to those hobbies. She noticed that a lot of her friends and favorite YouTubers were wearing glasses and wanted to try out the look for herself. She asked her mom if she could have an eye exam so she could get glasses.

“I was due for an eye exam,” Adrienne said. “So I brought her along with me.”

Her optometrist noticed that she had a lot of pressure behind her eyes. Knowing Vanessa’s medical history, the doctor called Dr. Fulkerson’s office. After some tests, Dr. Fulkerson’s suspicions were confirmed. Vanessa had developed hydrocephalus, a buildup of cerebrospinal fluid in the ventricles deep within the brain.

Her optometrist was astounded by the timing. It was in between the typical three-month follow-up MRI tests, and Vanessa hadn’t shown any of the typical symptoms, such as headaches, nausea or blurred vision. “He asked me ‘How did you know to bring her in?’” Adrienne explained. “And it was just because she wanted to look fashionable.”

Hydrocephalus is one of Dr. Fulkerson’s specialties, so he knew just what to do. He explained to the family the process to relieve the pressure by installing a shunt. “He already knew the material he would use,” Adrienne said.

Vanessa’s recovery plan continued with tests to ensure that the tumor did not return or that she did not see any adverse side effects. “If a tumor is going to come back,” Dr. Fulkerson explained to the family, “it’s going to come back in the first year.”

They never made me feel like I needed to hurry, but I’m not the type of person to wait for something like that. -Adrienne Miller, Vanessa’s mother*

At one of her follow-up appointments, Dr. Fulkerson asked Adrienne and her husband to chat with him in another room. An MRI had revealed that the tumor was indeed growing again. The Millers were presented with three options: Vanessa could undergo radiation to shrink the tumor, they could operate now and remove all the tissue, or they could wait.

“They never made me feel like I needed to hurry,” Adrienne said. “But I’m not the type of person to wait for something like that.”

This surgery went even smoother than the first. To help prevent another recurrence, the surgery team even scraped the bones where the tumor was attached. Despite the invasiveness of the operation, Vanessa was out of the hospital after just one day of recovery.

Her surgery happened just as Beacon implemented system-wide visitor restrictions to limit the spread of respiratory illnesses, such as COVID-19 and flu. Adrienne said she understood the restrictions, but it didn’t make the situation any easier for Vanessa or her family. Adrienne said Vanessa looked the doctors right in the eyes and asked, “What do I need to do to get out of here?”

The doctors told her she needed to walk. Within a day, Vanessa was out of the bed and walking, as if she hadn’t just seen her third surgery in less than a year. “She surprised everyone with how well she did after surgery,” Hauser said.

After her last surgery, Vanessa saw a physical therapist for six weeks, but did not require a neck brace or any supportive equipment. She still gets occasional headaches, and Adrienne says Hauser answers her phone call with a smile every time. “The surgery affects us every day,” Adrienne said. “A simple headache is not a simple headache after what Vanessa has gone through.”

Now ten years old, Vanessa still loves fashion and has even started designing her own clothing. Adrienne says she has returned home from work many times to find a shirt she bought for Vanessa trimmed and turned into an entirely new garment.

We have been very lucky to have him for what we’re going through. -Adrienne Miller, Vanessa’s mother*

Vanessa has also started to compete with friends in Fortnite and build with them in Minecraft. “I tried not to buy a game console,” Adrienne said. “But when you can’t go out, I thought it would be a good way to keep her engaged.”

As Vanessa adjusts back to normal life – at least as much as the current situation surrounding Coronavirus will allow – the Millers have finally been given a chance to reflect on everything that has happened in the past year and a half. Adrienne said she is thankful for Beacon and for Dr. Fulkerson, especially.

“We have been very lucky to have him for what we’re going through.”

From pediatric neurosurgeons to dedicated pain management specialists, the spine care experts at Beacon Health are here for you. Treating patients of all ages with both surgical and non-surgical treatments, their goal is to relieve your pain and get you back to health. 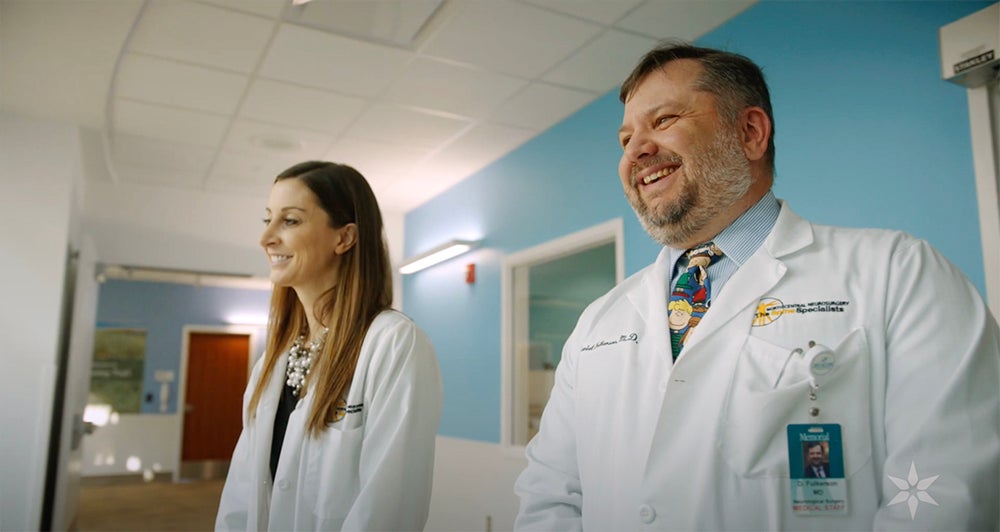 *The quotations provided in this article are part of a testimonial from the family of Vanessa Miller; a patient at Beacon Children’s Hospital.