Apr 26, 2019 in Spotlight by Heidi Prescott-Wieneke 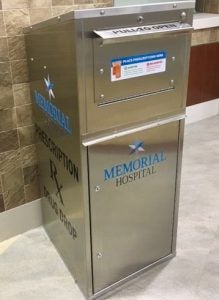 Being that Saturday is “National Prescription Drug Take Back Day,” Craig Whitfield wanted you to know about our own drop boxes at Memorial Hospital.

These secure boxes can be used to dispose of expired or unused prescribed or over-the-counter medications. Simply remove the medications from the original container, place them in a sealable bag, and drop them in one of the boxes.

The boxes are located near the cashier on the first floor of Memorial Hospital, in the same hallway as Cottage Place Gift Shop, and another smaller drug drop box is located in Team Pharmacy.

“We’ve had our pill drop box program in place for about four years,” said Whitfield, the Memorial Hospital chief of police. “We partnered with the Alcohol & Addition Resource Center in South Bend, which provided our smaller box as part of a grant they received.”

But Whitfield said he soon realized that our box was not large enough to support its popularity.

“We were literally emptying the box every other day,” he said, so the larger second box was added.

The total annual drug deposits have increased every year.

Memorial Hospital collaborates with the South Bend Police Department to dispose of the drugs on a quarterly basis. The Memorial Police Department has been able to partner with other area organizations on the drug drop boxes because of its status as a police agency.

Why is it so important to dispose of drugs in this manner?

“Never flush unused medicines or put them down the drain because trace levels of drug residues are often found in rivers, lakes and community water supplies,” Whitfield said. “You also shouldn’t put medications in the trash or recycling.”

The drop box located near the cashier and gift shop is accessible 24/7. The Team Pharmacy box is accessible during business hours.

A 2017 National Survey on Drug Use and Health indicated that 6 million Americans misused controlled prescription drugs, Whitfield shared. A majority of abused prescription drugs were obtained from family and friends, often from the home medicine cabinet.

For more information about “National Prescription Drug Take Back Day,” click this link. You’ll also find the website is searchable for locations across our region that will be accepting drug drop offs between 10 a.m. and 2 p.m. on Saturday.