Jul 15, 2019 in Spotlight by Heidi Prescott-Wieneke 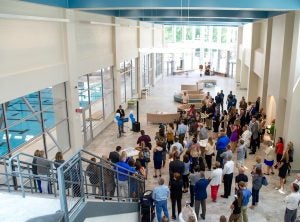 ELKHART – Years of planning and construction culminated Monday in community partners and leaders celebrating the opening of Elkhart Health & Aquatics.

The planned opening of Beacon Health & Fitness on Thursday will mark the completion of the first phase of the $59 million facility in downtown Elkhart. The larger-than-Olympic-size competition pool and The Commons, which includes space for community programs, classes and meetings, are scheduled to open Aug. 1.

The 171,000-square-foot, state-of-the-art facility is a collaboration of the Community Foundation of Elkhart County, Beacon Health System and Elkhart Community Schools, with contributions from the City of Elkhart, Regional Cities Initiative and the generosity of the local community, from Elkhart business leaders to philanthropists.

“We are very thankful for the k 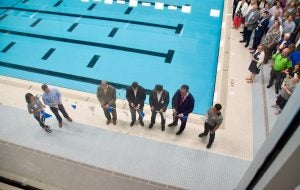 ey role Elkhart County’s philanthropic community played in raising money for Elkhart Health & Aquatics,” said Dr. Pete McCown, Community Foundation of Elkhart County president. “Because of that generosity, this is a gift that can be used by the entire community.”

Conversations about the project started long before its 2017 groundbreaking at 200 E. Jackson Blvd.

“More than four years ago, Beacon was approached by leaders in the community looking to fulfill a vision of bringing world class aquatics to our community,” said Jeff Costello, chief financial officer at Beacon Health, which will operate the facility. “Those leaders took note of Beacon’s dedication to health and began a conversation with us about what was possible.”

Elkhart Community Schools plans to provide its students access to the facility.

“From teaching elementary students to swim to competitive team sports to open community usage, children and families of the city will benefit from our connection to Elkhart Health & Aquatics,” said Dr. Steve Thalheimer, Elkhart Community Schools superintendent. “We are grateful to have played a role in this transformational undertaking.”

Elkhart Health & Aquatics will give people across the community and greater region yet another reason to visit Elkhart and spend time in downtown.

“We are proud to stand here today and see the culmination of years of planning and construction in a facility that rivals any in the nation,” said Elkhart Mayor Tim Neese. “The aquatics center alone will generate a tangible, positive impact for our community, but it is also part of a larger vision for our community that will bring transformational change to the River District and beyond.” 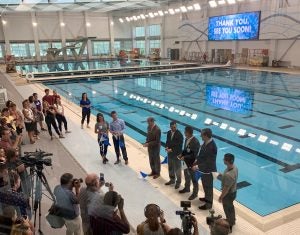