Aug 21, 2019 in Spotlight by Heidi Prescott-Wieneke 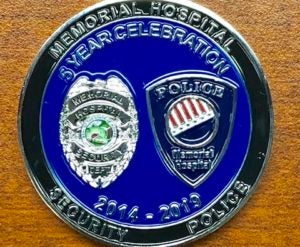 The front of the special commemorative coin being given to each officer on the Memorial Hospital Security Police Department.

The Memorial Hospital Security Police Department was recently designated a “Program of Distinction” by the International Association for Healthcare Security & Safety.

Memorial is one of seven hospital security police departments in the country that qualified and was approved for Program of Distinction status this year. It is the only hospital in the state of Indiana — and among 47 hospitals in the U.S. and Canada — to currently hold the designation.

“Memorial Hospital has received this award as a result of the dedication of all members of the security department,” said Craig Whitfield, Memorial chief of police. “Each officer has dedicated themselves to obtaining certifications that provide them with the tools and knowledge needed to be most effective in carrying out their responsibilities.”

The back of the commemorative coin.

At the same time the Memorial police department achieved this prestigious status, it is also celebrating its five year anniversary.

Memorial Hospital was second to IU Health Ball Memorial Hospital in Muncie in 2014 to swear officers into the first hospital security police departments in the state. Today, hospital police is the fastest growing segment of law enforcement in Indiana, Whitfield said.

Memorial Security Police officers patrol about 3 million square feet of space at the South Bend hospital, along with 20 other buildings, parking lots and parking garages. Officers have the same arrest power as any other officers while on Memorial’s hospital campus, and they conduct their own internal investigations.

“Memorial Hospital was only the second Indiana hospital to take advantage of the law allowing hospitals to formally establish their own security police departments. Our department started with eight officers and has grown to 14 officers,” Whitfield said. “Having our own department means we have a quick police response to any in-house issues. We also maintain a successful professional partnership with all other local law enforcement agencies.”

For more information about the IAHSS Program of Distinction designation: https://www.iahss.org/page/deptdistinction 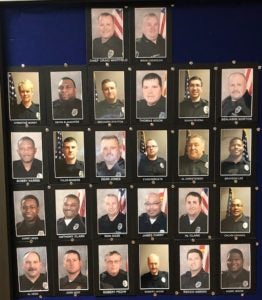