Nov 14, 2019 in Uncategorized by Benjamin Dashley 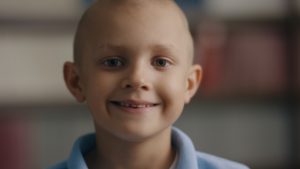 He watches his favorite team, the Chicago Blackhawks, any time he can. The 7-year-old’s family even builds a large hockey rink in his Goshen backyard every year so he can play and burn off some of his endless energy throughout the cold winter months.

So when Rudy lost energy and developed back and leg pain, his family could tell something was wrong. “We spent a lot of time in our family doctor’s office and couldn’t really get a good grasp of what was going on,” says Laura Chapman, Rudy’s mother.

After weeks of uncertainty, Rudy was diagnosed with Ewing sarcoma, a rare cancer that often forms in the bones.

Rudy immediately started chemotherapy, undergoing six rounds before having three ribs removed. Once he recovered from his surgery, he endured eight more rounds of chemo and radiation, all before he turned seven.

After this treatment, Rudy’s family expected to be finished with his medical ordeal. “We were thinking, ‘This is the end.’ We had planned to get his port out the next day,” his mother said.

The family was excited to put chemo, surgery and hospital stays in the past. Rudy was excited to get back to his favorite activities. But, Laura explained, “that’s when we found out the cancer had come back in his skull.”

After driving down to Indianapolis for most of his treatment, his family was exhausted. “The idea of having to do this again and drive back and forth again was pretty crushing,” Laura said.

At one of Rudy’s chemo sessions at Beacon Children’s Hospital, his oncologist proposed a less taxing option: “Have you thought about having the surgery done here?”

“We really hadn’t,” Laura remembered. “We had always figured that the best doctors were in the biggest cities, the biggest hospitals.”

But when the Chapmans met Dr. Daniel Fulkerson, they realized that they could get the care Rudy needed just miles from home. “We just immediately knew that this is where we’re supposed to be,” Laura said.

Dr. Fulkerson, one of only four fully board-certified pediatric neurosurgeons in Indiana, spoke with the Chapmans while Nurse Practitioner Natalie Hauser sat with Rudy in the waiting room.

“I learned more about fishing that day than I ever had known in my whole life,” Hauser said. “He’s intelligent beyond his years. He’s just incredible.”

Rudy was able to visit California for a fishing trip as part of Make-A-Wish. He says he had fun, but expected bigger fish. “I caught a mackerel, but there weren’t any fish bigger than a bass,” he said.

While Rudy was explaining the ins and outs of fishing and hockey to Hauser, his parents were learning more about Dr. Fulkerson. Laura was put at ease by his confidence and his ability to explain the procedure of removing Rudy’s tumor.

“He knew exactly what he was going to do. He had a plan. We felt very at peace with making the decision.”

The family was also impressed by a mission trip Dr. Fulkerson and Hauser took to Kenya. “That’s the heart of a doctor that wants to help people,” Laura said. “That’s who I want my kid to be with. That’s who I want to treat him.”

One of many concerns entering the surgery was the amount of time Rudy would spend in the hospital. Rudy and his family wanted him to be able to get back to playing hockey and acting like a seven-year-old.

Despite undergoing major brain surgery, including the implantation of a custom piece of polyethylene designed from a 3D map of his skull, Rudy was only in the hospital for one day. “He was in the hospital for such a short time that we didn’t even bring our daughter to see him.”

Another concern was the cosmetic adjustment for Rudy. Laura said Dr. Fulkerson didn’t even mention any cosmetic changes until the family asked after the surgery. Dr. Fulkerson said the surgery shouldn’t have a big impact on how Rudy looked.

“After the surgery, no one could tell,” Laura said. “We actually had to tell our daughter to be careful because she didn’t realize anything had happened.”

Back to a normal life 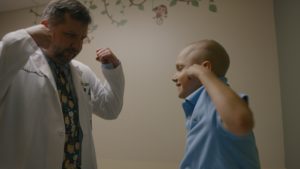 Laura and Rudy were both amazed by how quickly he was able to return to sports, especially hockey. “We had expressed some concern about skating after surgery,” Laura said. “Dr. Fulkerson said ‘Oh yeah, he’ll be able to play.’”

Rudy was able to play hockey a few weeks after his surgery, once his incision healed. He has been playing soccer while it’s still warm, but can’t wait to get back to his team in the Irish Youth Hockey League. “I just have to put on extra protection,” Rudy said.

Rudy still attends most Notre Dame hockey games. The team has taken him under their wing, even inviting him to sit on the bench during some pre-game practices. After taking a break during Rudy’s chemotherapy, Laura was surprised to find he had visitors: four members of the Notre Dame hockey team.

“It’s been a good boost for him,” she said. “They treat him like one of their teammates.”