Jan 01, 2020 in Spotlight by Heidi Prescott-Wieneke 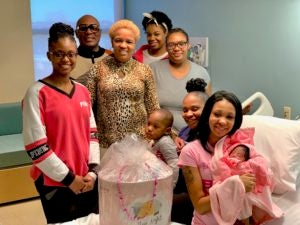 When it looked like her baby might be born after midnight, Da’Zheonna Moffett hoped she would be the first to deliver on New Year’s Day at Memorial Hospital.

She was thrilled to learn De’Arra was the first baby of the year and the decade not only at Memorial, but at all of Beacon.

It’s extra special to her grandparents, who are long-time associates at Elkhart General Hospital.

The 22-year-old Elkhart mom feels especially grateful and blessed because two previous pregnancies ended in loss in 2018. Pariz was born at 21 weeks and Troyce was born at 22 weeks.

“It was so hard losing them back to back,” Da’Zheonna said with tears running down her cheeks. 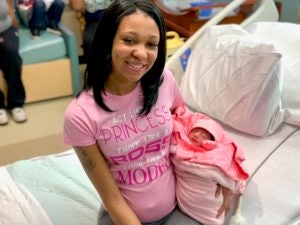 Baby De’Arra was born at 2:26 a.m. She weighed four pounds and measured 17 inches.

She thanks her family for their support, especially her mom. “Now I just want to be the best mother I can be,” said Da’Zheonna, whose grandparents have worked for our health system for more than 30 years. 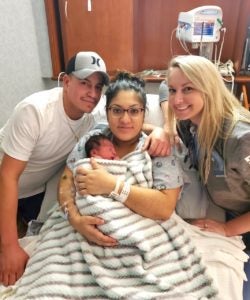 Pablo Santiago Hernandez is the son of Teresa Garcia Ponce and Jamie Hernandez Zamora. They are pictured with their Elkhart General nurse Jenny Thomas.

Congratulations to both families on their New Year’s babies!