Feb 24, 2020 in Spotlight by Heidi Prescott-Wieneke 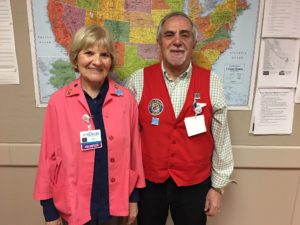 Between the two of them, Ann and Dan Wierzbicki have logged 4,041 volunteer hours at Elkhart General Hospital.

That’s more than 168 days, or almost half a year, if they volunteered around-the-clock, seven days a week. The word “dedicated” doesn’t do this power couple justice, considering they are retired and volunteer to keep active and stay “in the loop.”

“Simply put, volunteering at Elkhart General Hospital gives me a feeling of satisfaction and goodwill. I love it,” said Ann Wierzbicki, who rings up sales in the gift shop. “Management, staff and even visitors are so appreciative of volunteers that it makes you feel privileged to be there.”

Ann spent her career working as a secretary at the former Weston Elementary School. She later became a bookkeeper for her husband’s company, Details Ltd., during which time she started volunteering at the Concord Mall Hallmark shop and at the hospital. She wanted something else to do to besides keep the books.

“My husband happened to be a patient there, and while I visiting with him I wandered into the gift shop,” she said. “I thought that it would be a nice place or me to work, so I inquired as to how I would go about becoming a volunteer and the rest is history. It’s a joy to be there.”

After retiring, Dan joined Ann at Elkhart General. He’d had a close friend serve as what used to be called a “Redcoat” and help patients get to where they needed to go. In the past five years, Dan accumulated nearly as many hours as his better half.

“I felt compelled to give something back to the community,” Dan said about his decision to volunteer in retirement. “The expression of appreciation I get from a great number of the patients and staff gives me a sense of accomplishment. I enjoy people, and get some exercise to boot.”