Mar 11, 2020 in Spotlight by Heidi Prescott-Wieneke

Our very own Charles Coleman, a mental health technician at Epworth Hospital in South Bend, is scheduled to appear at 8 p.m. tonight (Wednesday, March 11) on the popular NBC television series “Chicago Fire,” Episode 17. We caught up with Charles to find out the details about his background and continued interest in theater. And who knew we had a classically trained opera singer in the house! 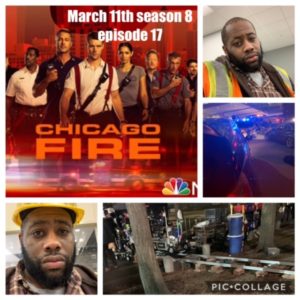 What TV shows have you appeared in: I recently started doing extra work, or background work, on a few of my favorite shows in Chicago: “Chicago Med,” “Chicago Fire,” “Chicago PD” and “Empire.” It so much fun, and they are always looking for real nurses, techs, firemen, and police officers.

What roles have you played? On “Empire,” I am a core cast member; my role is security to the Lyons family. On “Chicago PD” I’ve played a gangster and an officer. I’ve also been Detective Kevin Atwater’s stand-in, which means I run all his scenes before him to get his marks and lighting correct.

What interested you in this work? I really enjoy singing and acting. I actually went to school for Music Education.

What’s your background outside of health care? I’m from South Bend and went to LaSalle High School until it closed my senior year and I finished out at John Adams. I attended Alcorn State University and studied Vocal Music Performance. That’s where I was introduced to opera and was classically trained. I sing at church and started a local Community Gospel Choir.

After college I wanted to move to NYC and be on Broadway, but I was afraid. The stories of six people living in a studio apartment are true and I wasn’t ready to live that way and work side jobs so I could be available for auditions. Nothing was guaranteed and I needed a constant flow of income and health insurance.

Any fun stories you can share? My first background role was on “Chicago Med.” I was a hospital visitor. All I was supposed to do was walk from one end of the stage to the other, but I just couldn’t get that right. LOL. I made it so difficult.

The director told me when I hear background to move to my mark. But in my head I was thinking there had to be more to it than that. Who was I visiting? How sick were they? Was I sad or happy? So I froze during the first take.

The director yelled, “Cut!” and he asked if I was OK. I said I was OK and I repeated to him what he was telling me to do.

We tried it again and guess what, I froze again! This time, I yelled, “Cut!” which is something you never want to do. No one says that except the director. You should have seen the way everyone looked at me. I thought I was fired for sure.

This time, I explained to him why I was nervous and everything that was going through my head. He laughed and asked me was this my first time doing a TV show? I told him it was. He laughed again and explained to me that background roles don’t have a story line, but if I needed one, I could come up with one. We must have run that scene 25 times to get all the different angles they needed.

What are the actors like? Most of the actors are really friendly. They are a lot smaller in person. It’s true the camera adds about 10 pounds. So I have been watching what I eat and working out more.

What is the most surprising thing you’ve learned? I didn’t realize how much work it goes into recording a show. It takes about a week and a half to record one episode, and they take it one scene at a time. It could take anywhere from two to four hours to record. The director wants to make sure that he or she has every angle possible to choose from. They use people of similar height weight and complexion as stand-ins for the actors. They also dress them like the actor, and they all run through of the actor’s marks and cues to make sure the camera is in the right spot and the lighting is correct.

What is the best thing about working on these Chicago shows?

The food. OMG they have hired this catering company and food truck from the East Coast and it’s simply amazing. The last meal I remember was king crab, jumbo shrimp, swordfish, lobster, stuffed chicken, steak, loaded potatoes and salad.

Is it tough to juggle your work with acting? I am blessed to work at a place where I am encouraged to follow my dreams. Preferred scheduling helps me out a lot, and I am thankful for my coworkers who are so willing to trade shifts with me when I have a gig is Chicago. If I ever get an award I cant wait to give Beacon a shout out!