Sep 29, 2020 in Spotlight by Heidi Prescott-Wieneke 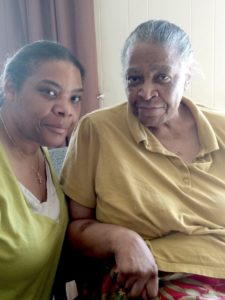 The staff at Elkhart General Hospital lined the hallway, cheering and applauding for a retired elementary school teacher.

Bennie Payton, too, threw her arms up in the air after learning she was the 1,000th COVID patient to be discharged from Beacon Health System.

“I’m truly blessed,” said Payton, 74, who spent nearly two weeks in the COVID Unit at Elkhart General after testing positive for the virus. “But it’s something I don’t want to repeat.”

It actually took some convincing to get the Elkhart senior to go to the hospital.

Her daughter, Cassandra Payton, explained how her mom initially lost her appetite. The next day, she felt warm and still wasn’t hungry, but Bennie didn’t think there was anything drastically wrong with her. Then she took a turn for the worse.

“The next day she felt even warmer, she wouldn’t eat, and she looked very uncomfortable, so I called 911,” Cassandra said.

Outside of these symptoms, Bennie also lost her sense of taste and smell. “And I was weak and losing interest in things,” she said. Even watching TV didn’t sound appealing. “I just didn’t have energy.”

Bennie said she never worried when she was recovering at Elkhart General. “Worrying don’t do anything but give you gray hair,” she said. “I let things hit my back and roll off.” Bennie spent 39 years as an Elkhart Community Schools teacher, retiring from Pinewood Elementary School.

But her daughter couldn’t help but feel concerned.

“My mom is the type where she might have sinus problems or a cold, but she never gets sick. So to look at her feeling like that, it was tough,” Cassandra said. “I’d call for a daily update from the nurse, but I wasn’t at peace because she was going through something and I couldn’t be there. My best friend was sick, and I couldn’t see her.”

Cassandra has spent every day with her mom since she was discharged.

“When we admitted our first COVID patient in March, we had no idea what this illness would mean for our patients, front-line staff and community,” Dr. Bache said. “We are thankful that the majority of our patients have been able to recover and return home to their families. We celebrate with each and every one of them.”

How Bennie contracted COVID-19 is unknown. “I wasn’t going out and I wasn’t around anyone I can think of that had it,” she said.