Sep 07, 2021 in Spotlight by Heidi Prescott-Wieneke

Julie Parrott Karrer has no problem recalling how she felt on her milestone birthdays.

The Elkhart native remembers the feeling a sense of despair when she was still single and turning 30. 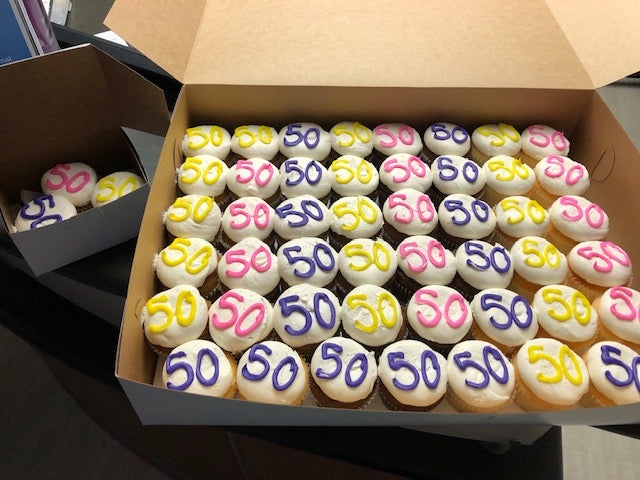 A wife and mother of five children, she cried when she turned 40.

She decided she wanted 50 to be different.

“I wanted to be grateful and full of appreciation going into 50,” Parrott Karrer said.

That’s why she is entering the new decade today with a challenge to herself: Do 50 things, 50 ways for other people. She came up with the idea when she was reading the book Zen Shorts, by Jon J. Muth, to her daughter.

“One of the stories tells of the panda’s uncle who would give others gifts on his birthday,” she said.

Her first gesture arrived in the way of sweet treats to the place where she was born.

Parrott Karrer entered the world around 5:30 p.m., Sept. 7, 1971, weighing in at 9 pounds, 9 ounces. She lived in Elkhart with her parents and close to her grandparents until she was 6 and her family moved to Greenville, South Carolina.

“My dad would brag that I was the biggest baby that was born that day,” she says. “All of my cousins still live in Elkhart. My childhood and best memories are there. I’ve lived in South Carolina all my life, but I still feel so connected to Elkhart.”

Elkhart General, in fact, was among her first clients at her first job out of college. And sadly, over the years, some of her final good-byes to family members happened there, too.

Today, she works as a relationship coach in Greenville; but she still feels a special bond to the city she once called home.

“These 50 cupcakes are the first item on my list,” Parrott Karrer told the maternity team in a short letter that accompanied today’s delivery. “Thank you for helping me celebrate my birthday.”

Parrott Karrer also plans to donate 50 blankets and 50 teddy bears to Beacon Children’s Hospital in the months ahead, while many of her other ideas are taking shape closer to where she currently lives.

“Sometimes you can focus on yourself so much, but I thought, what if we didn’t wait until we’re old to some of these things like give,” she said. “I decided I’m not going to wait, wait until I retire. I’m going to make this fun and make it last the whole year.”