Jan 21, 2020 in Spotlight by Heidi Prescott-Wieneke 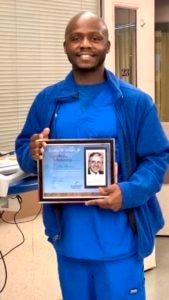 Julius Barhams never imagined he would be working toward becoming a nurse anesthetist.

Up until a few years ago, in fact, Barhams had no idea he wanted to serve others in medicine, let alone go back to school to become an advanced practice nurse who administers anesthesia for surgery and other medical procedures.

It’s funny how life works out.

Barhams’ life changed in 2012 when he became an outpatient surgery transporter at Elkhart General Hospital. Growing up, the Elkhart native’s passion surrounded music and performing.

“When I chose a degree in visual communications, I really was at a crossroads and didn’t know what I wanted to do. Then I couldn’t find a job,” Barhams said.

That’s when he applied at Elkhart General.

“I was trying to figure my life out and became fascinated with the medical field. That’s also when I started pursing a career in the hospital. I found my way.”

Barhams decided to go back to school at the age of 28 to become a critical care nurse.

“The best part of my job is making my patients feel safe and comfortable under my care,” said Barhams, who works in the Elkhart General Critical Care Unit. “Seeing a patient smile is very satisfying and uplifting.”

That’s not to say Barhams has an easy time juggling his career, schoolwork at Western Governors University and his family that includes six incredible children. This dad credits a strong, supportive family, the mother of his children and a family unit that is constantly encouraging him as he marches toward his goal.

“My kids are very understanding and proud of me,” he said. “I want to set great examples for them and show them how hard work pays off.”

And what an example this man has been.

No one would have enjoyed meeting Julius Barhams more than the late Jon Housand, a local business leader who was philanthropically active in his community right up until his death last October.

“We knew his legacy in this community was to the people and wanted to honor Jon and his family,” said Susan King, Beacon Health Foundation President. “We reached out to each of the donors, including the Housand family, to share our idea of a scholarship to support one of our nurses and they were thrilled with the idea.”

During the holidays, the Housand family surprised Barhams with the $5,000 scholarship toward his education. Housand’s wife, Sherry, along with sons, Tom and Brian, were on hand to meet the Elkhart General nurse.

“Jon Housand valued education above all things and lived his life serving others, making a difference for other people. The thought of providing a scholarship to a healthcare provider aligned all three of his core believes – education, serving others, and helping in the healthcare world,” said Tom Housand.

His father attended college on the GI bill after serving in the U.S. Air Force for six years. He received both his undergraduate degree and MBA from IU South Bend.

“He went to night school while working during the day taking care of his wife and three young children,” Housand said. “He served on many philanthropic teams and did volunteer work throughout his life – literally raising millions of dollars for others.”

Housand participated as a director, officer, volunteer and fund raiser in more than 40 economic development, cultural, social service, professional and service organizations. He served as executive director of the Elkhart General Foundation as his final “career” because of an opportunity presented to him through his lifelong business and personal friend Arthur Decio.

Working with the Elkhart General Foundation aligned with Housand’s desire to help those in need of financial assistance to be able to afford appropriate healthcare. Much of this stemmed from his late daughter, Betsy, who died at age 49 from complications of two kidney transplants due to a lifetime of dealing with Lupus.

Meeting Barhams and presenting him with the scholarship was a humbling event for the Housand family and a sentimental moment for the Elkhart General nurse.

“Even though we’d never met, I could relate to the Housands about losing their father and husband because I lost my father in November 2018,” Barhams said about his dad, Vance. “He was a big motivation for me and my biggest supporter.”

It also was a moment Jon Housand would have cherished, his son said, except his father would not have wanted to be part of a “big deal,” since he preferred living his life quietly making a difference, staying out of the headlines not looking for credit.

“Thinking about it that way,” Tom Housand said, “it was perfect to honor Jon Housand and Julius this way. Jon would have wanted the spotlight to be – as it appropriately was – on Julius.”