Elkhart General Hospital refuses to give up on Elkhart man 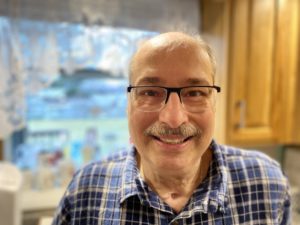 “I basically put my life in his hands, and I was OK with that,” Don “Mike” Morgan said of Dr. Walter Halloran.

Mike’s surgery in 1996 was successful. But a couple days later, he began to react poorly to a blood thinning medication used during the surgery. It was around this time that Dr. Halloran first heard Mike’s name. “He came back to the hospital very shortly afterwards with a stroke, with a blood clot, with respiratory failure and gangrene in his fingertips,” said Halloran.

The physician who worked with Mike years ago, it turns out, was a partner of Dr. Halloran at the time. Mike eventually recovered from the surgery and the complications surrounding it. As the years went on, Mike attended his yearly cardiology checkups and kept up with his recovery.

But in 2018, about 22 ½ years after his Ross procedure, his valves started to swell. Failure of the valves was expected. The Ross Procedure has a potential long term failure rate – even when performed correctly – so its use in adult patients has become less common.

With another heart surgery on the horizon, Mike was understandably nervous. “The first time I had it done, they had to crack my breastbone,” Mike said. “That was the part that worried me the most.”

Dr. Halloran did his best to put Mike at ease. “He actually drew, on the (white)board, my heart and veins and valves.

“I basically put my life in his hands, and I was OK with that,” Mike said.

Dr. Halloran had calmed most of Mike’s fears, but on the day of the surgery, Mike said he wasn’t so sure. “I looked at my wife and said, ‘You know, something just doesn’t feel right,’” Mike said. “‘I don’t think it’s going to be as easy as it’s supposed to be.’”

Mike’s wife assured him and told him that God would get him through the procedure. “I got the right guy,” Mike said. “If something does happen, I’ll wake up.”

“When I did wake up, I thought it was a couple days after the surgery,” he said. But it had been longer than a few days.

After the nine-hour surgery, Mike “looked great,” Halloran said, but required a blood transfusion to increase his plasma count. “In just a few minutes, he had a terrible allergic reaction to the plasma.”

That reaction caused Mike to become “so sick that we couldn’t oxygenate him,” according to Halloran. “His lungs stopped working, and he had to go on an artificial lung support device called an ECMO.”

An ECMO machine – extracorporeal membrane oxygenation – is a life support device that replaces the function of the heart and the lungs so those organs can rest. Mike was transferred to a hospital in Indianapolis to use their ECMO, but still lost his kidney function. His fingers and toes developed gangrene. He was unconscious for weeks.

Eventually, the Indianapolis hospital decided they could no longer care for Mike. They transferred him back to Elkhart General for end-of-life care. Dr. Halloran had a different plan.

“We felt that he could make it through this,” Halloran said.

Mike’s arrival prompted a “whole cascade” of services, from kidney care to replacing tubes to involving orthopedic surgery to help with his gangrene, Halloran explains.

“He remained so sick,” Halloran said. It was another three to four weeks before Mike was fully conscious. “Then he started waking up.”

Once Mike awoke, he continued to improve. But he still had a long road of recovery ahead. Halloran said he was proud to see the “rallying of the troops” around Mike throughout the hospital, including the rehabilitation team that helped Mike walk again.

“He just kept getting better day by day,” Halloran said.

But his recovery wasn’t immediate. In total, Mike spent 132 days in the hospital and lost more than 80 pounds. “I make it sound like a real dramatic, quick improvement, but it wasn’t,” Halloran said.

But Mike kept a positive attitude, even when tubes blocked his ability to talk. Months later, Mike spoke glowingly about “the Beacon family” he encountered at Elkhart General. “They made me feel like I was the only patient,” Mike said.

Mike worked with dozens of Beacon experts as he continued his recovery, and he can list the name of every person he encountered. He spoke glowingly of his rehabilitation team, his inpatient nurses and especially Dr. Halloran. “He coordinated my care,” Mike explained.