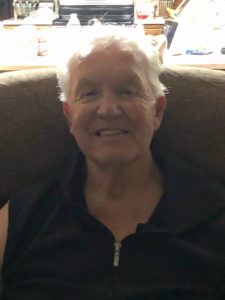 When Cliff Johnson meets his third great-grandchild later this year, he’ll do so as a cancer survivor.

“They haven’t told us if it’s a boy or a girl yet,” says Sharon Johnson, Cliff’s wife.

Ten years ago, Cliff’s family took him to the ER when he started bleeding unexpectedly. Physicians diagnosed him with colorectal cancer. Cliff had seen his first wife undergo chemotherapy and saw how it affected her before her death. “He knew he didn’t want it,” says Sharon.

Beacon Oncologist Dr. Sam McGrath and the Beacon Cancer Care team understood that request and instead decided on a plan of surgery and radiation. In 2012, Cliff went through surgery to remove the cancerous tissue. “But three days short of a year,” he says. “It came raging back.”

Cliff’s colon was removed in 2013 to prevent any future recurrences.

Cliff remained cancer-free for a short time, but eventually his physicians found tumors in his lungs. Once again, he chose to pursue radiation. “The radiation has really, really done the trick for him,” says Sharon.

Cliff, now 82, and Sharon have three children, five grandchildren and two great-granddaughters, with a third grandchild on the way. Cliff says he’s grateful to be alive.

“We’ve gone up and down, but we keep getting back up,” he says.