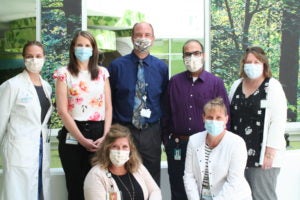 Out of 56 participating children’s hospitals from around the nation, Beacon Children’s had the fastest time to fluid bolus for pediatric patients with severe sepsis.

Sepsis is an overwhelming infection in the body, according to Jen Tonkovich, Director of Children’s Services at Beacon Children’s Hospital. It can result in shock, a drop in blood pressure, organ failure and even death.

The IPSO study monitors five key process indicators that determine timely recognition and management of sepsis in children. One of them is the timely administration of IV fluid bolus. A fluid bolus is an amount of IV fluids injected into a patient’s vein in a very short amount of time – ideally within 20 minutes – after recognition of severe sepsis. This helps in improving blood supply to vital organs like the brain, heart, and kidneys, and also helps increase blood pressure.

Dr. Nikhil Patankar, Tonkovich, Dr. Kate Dutkiewicz and others have all played pivotal roles in Beacon’s improvement in pediatric sepsis outcomes. Patankar, the IPSO project’s lead physician, said the honor was an “a-ha moment” for Beacon. “For us to be recognized on a national scale was a very proud moment for the hospital,” he said.

Patankar credited Beacon’s size, compared to some of the association’s larger members, as a benefit to the program. “The thing that made me excited about this project was that there were fewer hoops to jump and things can happen a lot quicker in a smaller setting like ours.”

Patankar says the project couldn’t have been so successful “without the support of [Beacon Chief Clinical Officer] Dr. Sam El-Dalati and [Executive Director of Quality] Amy Floria and executive leadership.”

Dr. Dutkiewicz says communication was essential to the study. “Communication is frequently the biggest issue,” Dutkiewicz says. “When you’ve got different departments, sometimes getting everyone on the same page can be difficult. But we’ve worked hard to communicate our intent.”

The standardization of severe sepsis care and inclusion of key antibiotic Cefepime in a machine called a Pyxis were also big wins, according to Patankar. The Pyxis is a medicine dispensing machine that allows healthcare providers at BCH to quickly access certain treatments.

Beacon Children’s Hospital also recently created an “order set” to speed up the process. An order set is a standardized treatment plan that takes certain criteria into account, such as weight and age, without requiring a caregiver to input every medication. Because sepsis care is so time-sensitive, an order set is immensely helpful to both patients and providers.

Dr. Patankar singled out Julie Gumm, Clinical QM Data Analyst RN, as essential to the improvement process. Gumm ensured that all data from the program was entered into the record. “For any quality improvement project, it’s important to have baseline data and continuing collection,” Patankar said. “It wouldn’t have been a well oiled machine like it is today if it wasn’t for Julie.”

Gumm, Patankar, Dutkiewicz and Tonkovich were all appreciative of the recognition as the top performer in the program. They also mentioned how exciting it was to look forward to how their work can help others and save the lives of children across the country. “The goal for this study is not to say that we’re the best,” Tonkovich said. “The goal is to improve outcomes for all children.”