Ukrainian immigrant Olga Ustymchuk, an anesthesia technician at Memorial Hospital, left, and Debra Thompson, Memorial’s executive director for surgical services, push carts of supplies that Beacon is donating to Slavic Baptist Church in Elkhart. The church plans to fly the supplies to Poland, where they will be shipped to a Ukrainian hospital that is treating soldiers and civilians.

Beacon Health System is donating supplies and $25,000 to help victims of the Russian invasion of Ukraine — on behalf of our more than 7,000 associates. This is one of many inspiring stories about Beacon associates who connect with heart as they reach out to help those in need.

Sleep has not come easily for Olga Ustymchuk recently as she hopes and prays that her loved ones in her native Ukraine will survive the Russian invasion.

Her colleagues at Memorial Hospital, where she is an anesthesia technician, have given her plenty of hugs but had otherwise felt powerless as they’ve seen her stress and worry.

So associates at Memorial and Elkhart General Hospital were eager this week to take action by gathering up some unused supplies and medical instruments to donate to Slavic Baptist Church in Elkhart on behalf of Beacon Health System. The church, having received a list of needed supplies from a hospital in the eastern European nation, hopes to soon fly the items there.

“It’s hard and difficult to explain because my heart is so full,” Ustymchuk said, starting to cry. “It’s no words, it’s only emotion. All of Beacon, it’s just great. It’s just people with one big heart. They help a lot. We all want to say thank you.”

Since Memorial and Elkhart General are Level II and Level III trauma centers, respectively, they have plenty of unused supplies that Ukrainian hospitals need right now to treat injuries as Russia bombs and shells residential and commercial areas, said Debra Thompson, executive director of surgical services for Memorial and trauma services for all of Beacon. 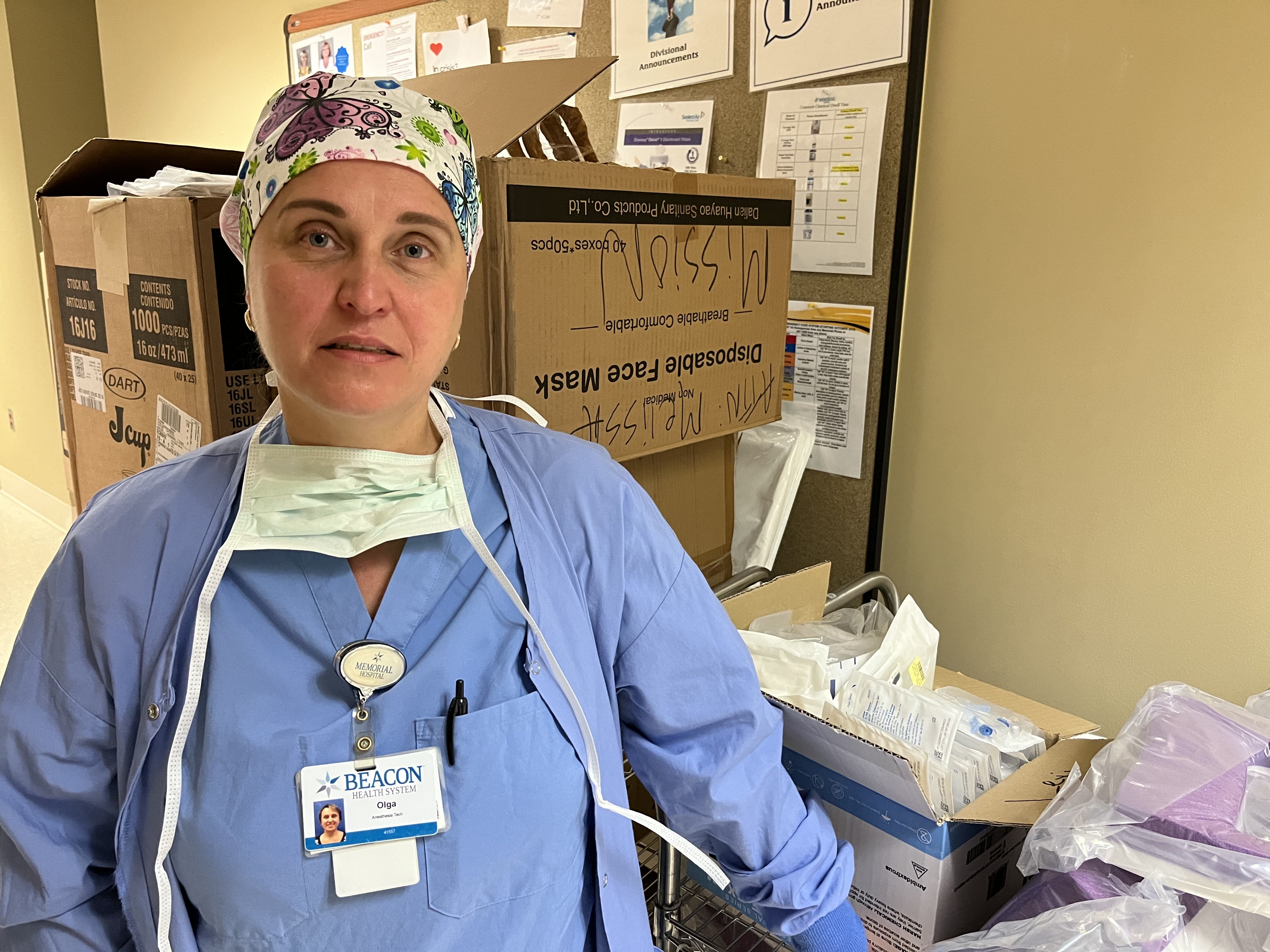 Beacon has sent the church about 50 boxes of the items, which it typically stores for its physicians to use on mission trips. They include supplies for setting and stabilizing broken bones; personal protective equipment for medical teams; and surgical supplies like IV tubes, dressings, and sutures.

In addition to medical supplies, Beacon is donating $25,000 to the U.S. Ukraine Foundation to support its humanitarian efforts and refugee assistance in Ukraine.

“Our mission compels us to care for the health and well-being of others,” said Kreg Gruber, chief executive officer at Beacon. “We are deeply saddened by the events in Ukraine, and for the loss of lives, destruction of communities and displacement of families. We know this is not going to be over quickly, so we are working to help meet some of the most basic needs of people in Ukraine. Our contribution won’t change the situation, but it might make it a little better.”

Slavic Baptist Church member Irina Ilyuk, who emigrated to the Elkhart area in 2001, said the church was still trying to determine the best way to fly the supplies to Poland. From there, they will be driven to a hospital in Dnipro, a city in south-central Ukraine.

“This is a hospital where they bring soldiers who were wounded and the civilians who got attacked and are in critical condition,” Ilyuk said as Memorial associates packed her Honda Odyssey minivan full of the boxes.

As they finished loading, Ilyuk pulled out her phone and scrolled through photos of Ukrainians who’ve lost limbs, graphic images that the hospital sent her after she asked what supplies they need most. She also played a video of high-rise buildings being hit with ammunition.

“It’s horrible,” Ilyuk said. “They save their lives if they can. All over Ukraine they are bombing apartments. Just people who are trying to hide underground. It’s not a war, it’s a terrorist attack. It’s hard to watch when your family is there.”

Ilyuk thanked the Beacon associates for gathering such a large amount of supplies in just a couple of days, and she also asked for their prayers.

“The prayer does work,” she told them. “In the front lines, soldiers, their testimony is that they can feel a power from above. Some of the rockets are not even reaching them because God is doing his job. Here we can do little but together we can do a lot.”

If you want to support victims of Ukraine, many other charitable and humanitarian organizations are coordinating assistance to the beleaguered nation. These American Hospital Association-supported organizations include: United Help Ukraine, the Ukrainian branch of The Red Cross, the International Medical Corps, UN Refugee Agency and Voices of Children.