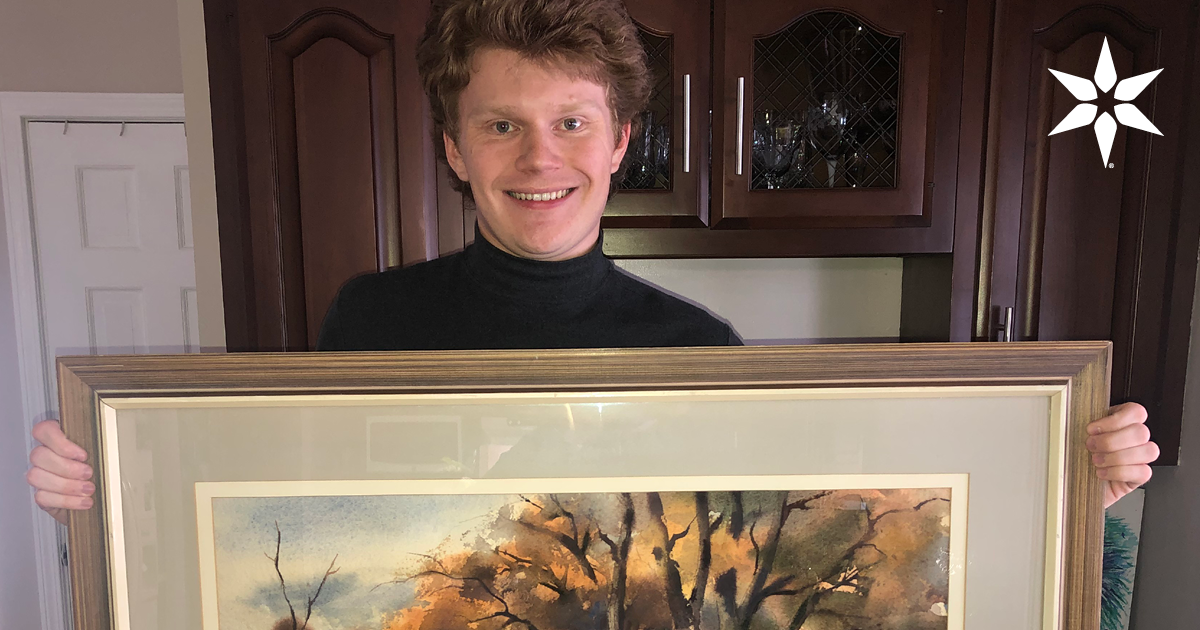 For Jared Basker, the excitement of finding his great uncle Edward J. Basker’s paintings is matched perhaps only by his joy in displaying them and his hope that he’ll one day pass them on to future generations.

Basker’s latest quest, aided by the keen memories of a couple of Memorial Hospital associates, took him to the hospital’s archives.

Basker, 25, an artist himself, is too young to have met Edward Basker, who lived in South Bend all of his life before dying in 1972 at age 63. But he grew up hearing proud stories about how his great uncle had taught himself how to paint, ultimately becoming a noted local watercolor artist who taught art students in his home and at the University of Notre Dame.

Since he started collecting them in 2013, Basker has amassed more than 160 Edward Basker watercolors and pencil drawings, about 50 of which are framed. He has found at least 10 paintings through an “Edward Basker Watercolor Artist” Facebook page that he launched in 2014.

Jared’s grandmother, Hazel Basker, first told him that an Edward Basker watercolor had once been displayed in the hospital. That claim was reinforced when George King, former director of materials management at Memorial and a follower of the Facebook page, recently messaged Jared to tell him that indeed, a Basker watercolor had hung in the hospital’s administrative lobby at least until King had retired in 2005. King has six Basker paintings in his own home.

Intrigued, Basker decided to call his friend Kayla Penister, a project lead for operations at the hospital. Penister then asked Sue Wills, an executive assistant who has worked at Memorial for 43 years, where such a painting might be.

Wills said she remembered the painting and knew that it had been taken down a few years ago during a redecorating. She told Penister that it would be stored in Memorial’s archives, and Penister found it there within about five minutes.

“I was thrilled to have found the picture, especially as quickly as we did,” Wills said. “I’m glad the Basker family is now enjoying the painting. Those types of paintings are priceless.”

Penister picked up her phone and showed Basker an image of the painting using Facetime, and he quickly confirmed its authenticity.

Attached to the frame is a plaque that reads, “In grateful consideration for the inspiring leadership of L.O. Gates, given by members of the hospital board of directors, 1958.”

The watercolor depicts a landscape scene of a wooded area in the fall. Basker has polished up the frame and has hung it in his family’s kitchen, where he just repainted and laid new flooring.

“It’s just nice having his work back out in the light of day,” Basker said. “That’s the whole purpose of it for me. They are something that I can cherish for the rest of my life.”

See Edward Basker’s works – and this painting – in person

The St. Joseph County Public Library, 304 S. Main St. in downtown South Bend, will feature an exhibit of Edward Basker’s paintings, including this one, beginning April 23 with an Opening Night from 4 p.m. to 5 p.m. in the 2nd Floor Gallery & Exhibition Room.

The exhibit, ending June 24, will feature more than 50 watercolors and sketches on loan from Jared Basker, other family members and collectors, and some museums. The watercolor paintings will be on display and can be viewed at any time during regular library hours.