Now in college, preemie twins remain closer than ever, grateful for parents and Beacon

Next month, Beacon Children’s Hospital will celebrate five years of delivering expert care, close to home in its current location.
So we are shining a spotlight on some of our inspiring patients, like Amanda and Erin Farmer. 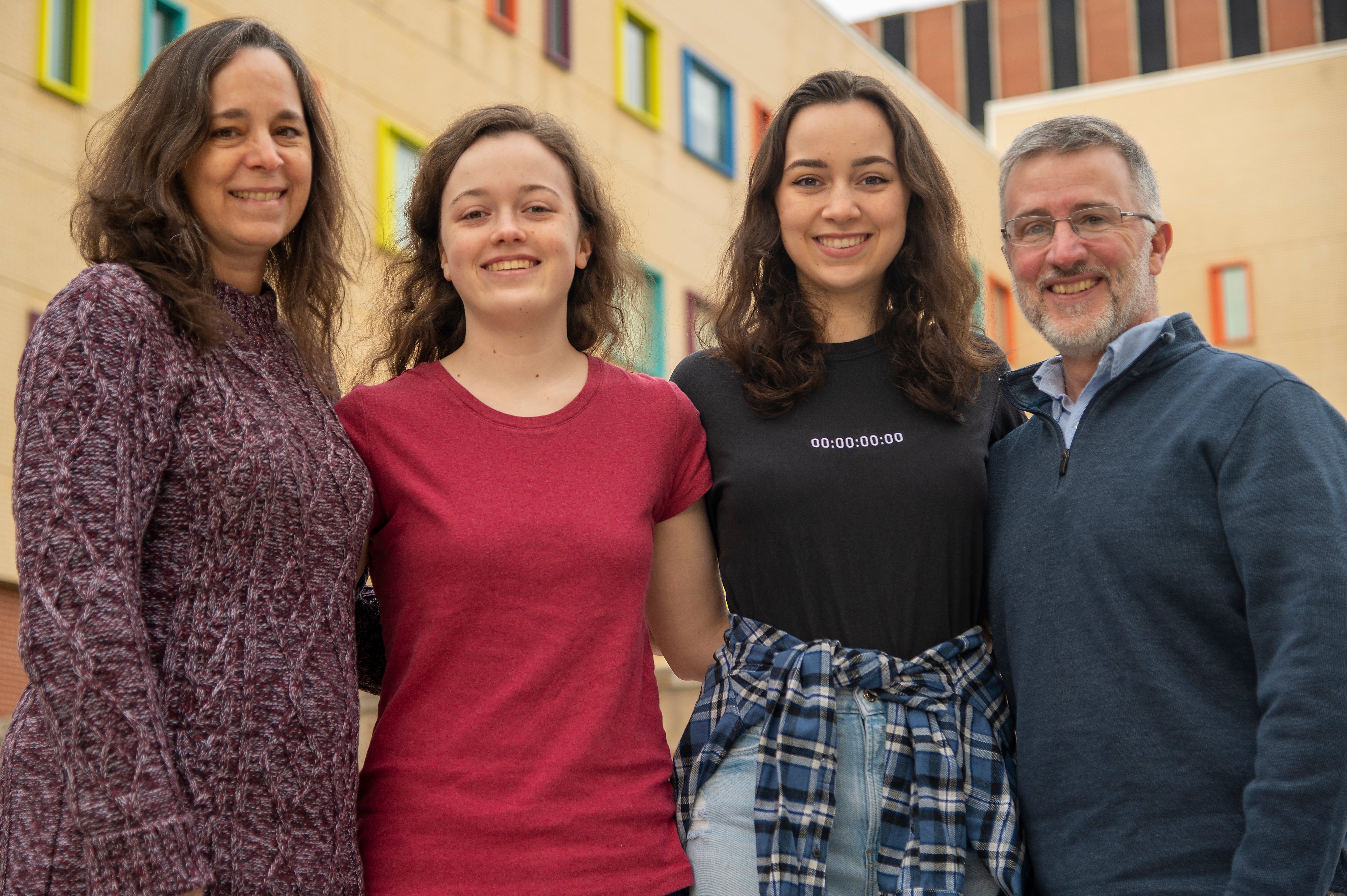 They might know each other better than they know themselves, and what they know, they deeply love.

“Growing up, I very much fell into the older sister role and Erin, the younger sister, even though we’re only 50 seconds apart,” Amanda says. “Erin was very cautious as a child. I was the one who was like, ‘Oh, I’m going to climb onto the garage roof.'”

“Amanda has always been more spontaneous and willing to get out there and try things,” Erin says. “That’s something I just really appreciate about her.”

“And I’ll drag you along with me,” Amanda says, prompting both to laugh.

“Yep, and I’ll have a great time and I’ll be like, why didn’t I just try this in the first place?” Erin says.

It’s an incredibly exciting time for the sisters. In the near term, they’re back home in South Bend for the summer, happy to see each other daily again after spending their first academic year apart at different schools — Amanda is attending Columbia College Chicago while Erin is enrolled at the University of Notre Dame.

More broadly, they’re excited to have their whole lives ahead of them, a fact they might appreciate more than many of their peers. That’s because they and their parents, Holly and Nick Farmer, know that things could have turned out far differently without the skilled and compassionate care they received before, during and after their premature births at Memorial Hospital.

Although the family has always called them “twins,” Amanda and Erin were originally part of a set of quadruplets but, sadly, two of the fetuses were lost early in Holly’s pregnancy. At 30 weeks, about six weeks earlier than most twin pregnancies, Amanda and Erin entered the world, delivered via cesarean section on Dec. 6, 2002. Amanda weighed three pounds, 10 ounces, while Erin weighed three pounds, 13 ounces. 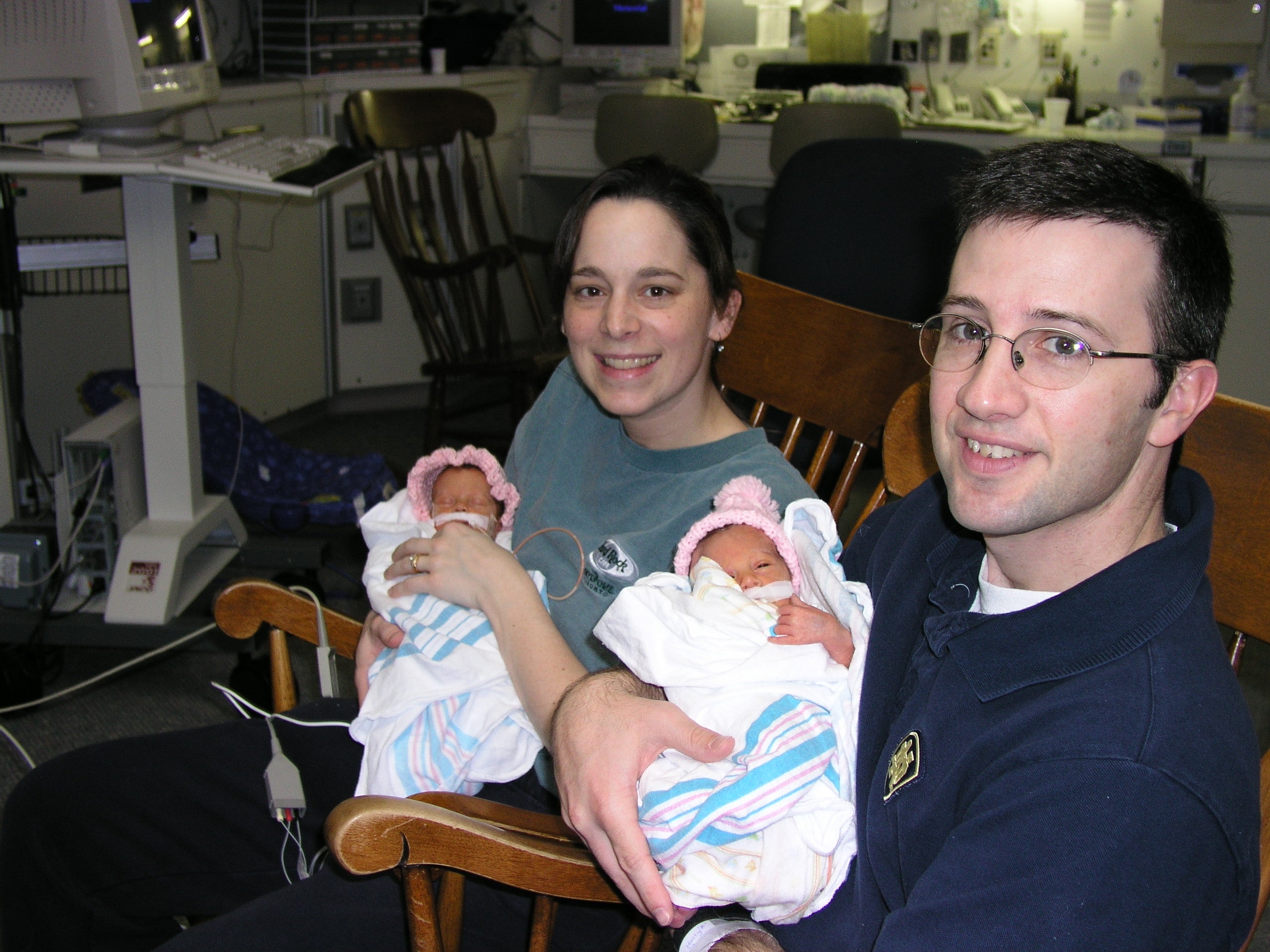 Holly and Nick Farmer hold their prematurely born infants, Amanda and Erin, in the Memorial Hospital Neonatal Intensive Care Unit shortly after their births in 2002.

They spent weeks in the Neonatal Intensive Care Unit, where they were kept in specialized incubators to keep them warm and protected from germs. Two years later, doctors would repair a congenital hole in Amanda’s heart.

Other than that, Holly and Nick feel extremely lucky that their daughters have had no health problems related to their premature births. Among the care providers they thank is neonatologist Dr. Robert White, who last summer stopped by the twins’ open house after they graduated from Adams High School.

“We are forever grateful and appreciative of the care and compassion we received at Memorial,” Holly said. “We have our girls because of the continuum of care at Memorial.”

Hitting all of their development milestones not long after their birth, they graduated from Adams with high honors and were involved in sports, music, academic and drama activities beyond the classroom.

Both caught the drama bug during a summer theatre camp after eighth grade, and it’s now figuring prominently in their college plans. Amanda is double-majoring in musical theater and communications, while Erin is studying film, television and theater.

“We weren’t ever facing any deficits in school,” Erin said. “Once we were in preschool we were ahead of it. We caught up pretty quickly and I’m grateful to Memorial for that.”

Still, they’re very aware of the difficulty their parents encountered in having them.

“It just gives me this great appreciation for my mom and my dad, and the long journey that it took to have us,” Amanda said. “She went through that loss during her pregnancy. Just all of the grief and longing that they went through. They’re great parents to have and I feel very lucky to have them.”

“I feel very similarly,” Erin said. “I have a lot of gratitude because it’s a lot. It’s never been any question of whether they love and care for us because it took so long to have us, they clearly wanted us badly.”

They’re also grateful for the care the whole family received. They have kept in touch with Beacon staff at annual NICU reunions, and they have participated in Beacon initiatives to gather feedback on the children’s hospital from families.

Through it all, the girls have become each other’s biggest fans. Amanda says Erin is the most intelligent person she’s ever met, and “she’s very driven to achieve anything she can.”

“Erin has a large spectrum of things that she’s good at,” Amanda said. “They say jack of all trades, master of none? I would say she could master anything she chooses. She is the one of the smartest people I know, always driven to achieve anything she can. Also a very artistic person but she doesn’t get enough credit for that.” Erin again smiles with obvious appreciation for her sister’s words.

“I think Amanda has always been someone who’s looking out for other people and cares,” Erin said. “She’s very observant. It makes her a really good actress, and also a good friend and sister and just a truly wonderful person to be around.”

Holly and Nick have loved seeing their daughters’ personalities and bond with each other evolve and grow over time. They’re excited to see what the future has in store for their girls who couldn’t wait to enter the world.

“Growing up, we supported their individuality and they had similar and different interests,” Holly said. “Since going to different colleges, they have grown closer and enjoy connecting through music and theater. We are so proud of their desire and intent to impact the world through the arts.”