Nothing undersized about Beacon NICU preemie, honored as a Penn Salutatorian

So incredibly tiny. So fragile.

Born by emergency c-section 12 weeks before his due date, Evan Nayee weighed just one pound, 12 ounces, a weight small enough to classify him as a “micro-preemie.” So small, his father could slide his wedding ring all the way up to his shoulder. His skin was translucent. 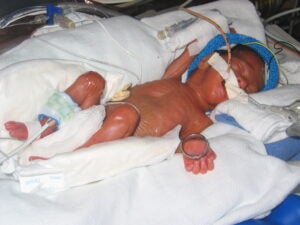 Anish Nayee’s wedding ring is nearly the width of his son Evan’s hand in this family photo taken in the Memorial Hospital Neonatal Intensive Care Unit.

Some scary complications sent Anish and Laura through an emotional whirlwind. And even after Evan went home, a team of therapists regularly visited their home for two years to make sure Evan hit his developmental milestones.

In May, the Granger couple sat with thousands of other parents at Penn High School’s graduation, and they found those difficult memories resurfacing. But their fears and uncertainty had now given way to immense pride. Instead of wearing all kinds of wires and tubes, Evan now wore an impressive array of colored cords with his cap and gown, along with a white tassel signifying that he earned class Salutatorian honors. 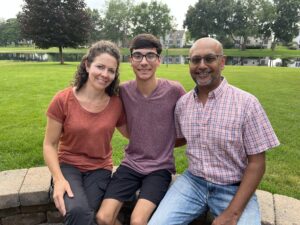 As it turns out, there is nothing undersized about Evan’s determination to succeed in school and extracurriculars.

Anish, a urologist, and Laura, a pharmacist, have another reason for their immense pride: Evan’s potential career path.

The former micro-preemie who relied on the exceptional care of doctors and nurses in the NICU to survive and thrive plans to explore a career that lets him care for others. Evan plans to attend Indiana University Bloomington this fall, majoring in biology with plans to take some pre-med classes.

Of course, his parents are proud regardless of his career choice.

“Just coming from where he started,” Anish said, “he’s our little miracle child.”