Feeling welcome: Beacon’s Granger Sunburst offers boy the chance to run with kids like him 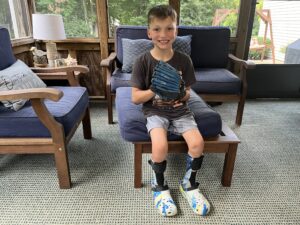 Miles Gappa, 9, is excited to run in the Granger Sunburst on Sunday.

Miles Gappa is quick to tell you his favorite sport to play is Little League Baseball because winning requires all nine players to work as a team, with each player in the lineup getting a chance to bat.

But that feeling of belonging, of being accepted by his teammates, hasn’t always come easily for the Edwardsburg 9-year-old. And that’s because Miles doesn’t see other kids wearing the leg braces he wears on the ball diamond, at school, or in his neighborhood.

But Miles and his family are hoping they might see other kids with similar limitations on Sunday.

He plans to participate in an untimed adaptive athlete event at this year’s Granger Sunburst Races. It’s a one-mile course outside Beacon Health & Fitness Granger. More than competing for a prize, however, Miles hopes to see other kids who wear leg braces running with him.

Miles was born with clubfoot in both feet, an abnormality in which the top of the foot is twisted downward and inward. Some nerves in his feet don’t respond as quickly as they should, affecting his motor skills.

Miles’ mom, Stacey Gappa, said the Sunburst follows a baseball season in which other kids on his team had started running faster on the field. 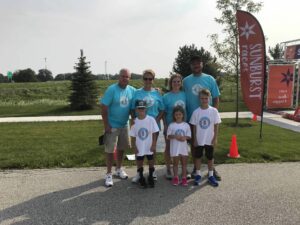 Miles Gappa, 9, lower left, with his grandparents, parents, sister and brother at the inaugural Sunburst Races – Granger in 2021.

She’ll be there to support him, along with other family members, including his dad, brother and sister and his grandparents. The group participated in the untimed family walk in last year’s inaugural Granger Sunburst.

Dr. Christopher Ketcham had kids like Miles in mind when he helped create the event, now in its second year.

The Beacon physiatrist, who specializes in physical medicine and rehabilitation, hopes it also will motivate his patients of all ages who are recovering from illness or injury. Dr. Ketcham works to get patients as mobile and active as possible after any type of disability, such as a brain injury, trauma, stroke, heart attack or amputation. He hopes patients will use such events as goals to get back out into the community as they recover, a starting point to continuing regular physical activity.

And Dr. Ketcham urged people not to feel intimidated by the term “athlete” in the event’s name.

“It’s really for people who want to lead an active lifestyle, not necessarily for your superstar athlete or anything like that. It’s an open invitation to come, spend some time with other individuals who might be like you, and be active.”

Don’t think for a minute that Miles can’t run in his leg braces.

He offers a heartfelt message to those who are thinking about “competing” against him on Sunday. He hopes others will join him at the starting line at 9:30 a.m. on the paved outdoor path at Beacon Health & Fitness. Last-minute participants can even register at the event. Spectators are also welcome.

“People can meet other people just like them and they could have a really fun time,” Miles said. “They can be surrounded by people like them. They’re likely to feel more welcome.”

While he definitely looks forward to having fun, Miles also can’t wait for the friendly competition.

He adds with a playful boast, “I’m actually really fast with my braces on.”

In addition to the 9 a.m. Adaptive Athlete Event, the Sunburst Races – Granger will offer two other events Sunday, Aug. 7. These events include the 1 Mile – Timed Run at 8 a.m. and the 1 Mile – Untimed Family Walk at 10:30 a.m. Packet pickup is Saturday Aug. 6 from 10 a.m. to 12 p.m. at Beacon Health & Fitness in Granger. Participants also can get their packets on race day in the information tent outside the facility. For more information or to sign up for any of the events, go to SunburstRaces.org.