be_ixf;ym_202209 d_29; ct_50
Home > “Our family truly considers this a miracle” and is grateful for Beacon Health neurosurgeon and care team 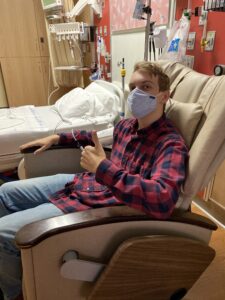 Timothy “T.J.” Freeby had initially figured his two weeks of debilitating headaches last fall came from stress as he prepared for his final exams at Purdue University.

On one day in particular during that time, he recalled planning to leave his friends’ apartment to pick up some groceries for a cookout.

“All of the sudden I just get this splitting headache that sat me right back down on the couch,” T.J. said.

Back home in South Bend for winter break, he learned there was something far more serious happening than simply final exam stress.

T.J.’s parents, Diane and Chuck Freeby, took him to see Dr. Daniel Fulkerson, neurosurgeon at Beacon Children’s Hospital. Dr. Fulkerson diagnosed T.J. with hydrocephalus, which is the buildup of fluids in the cavities or ventricles deep within the brain. If untreated, pressure from too much fluid can damage brain tissues and cause a range of brain function problems. Severe headaches are a leading symptom.

“Dr. Fulkerson took one look at the MRI and said, ‘You should be in a coma and I’m going to admit you,’” Diane recalled. “It was very surreal, very mind-blowing. I was looking at a young man, our son, who seems to be feeling fine besides having these headaches. We were really grateful that T.J. got in when he did. It happened so quickly.”

Dr. Fulkerson said T.J.’s fluid buildup apparently resulted from a benign or non-cancerous tumor in his brain that had been blocking a brain fluid pathway that’s about the size of a pencil lead. Neurosurgeons have two options for treating hydrocephalus. More commonly, they surgically insert a flexible tube called a shunt to redirect the fluid to another part of the body so it can be reabsorbed.

But shunts require long-term maintenance and may need to be replaced due to blockages, breaks or infections. About half of hydrocephalus patients younger than 18 need another surgery to correct problems with the shunt within two years, Dr. Fulkerson said.

Dr. Fulkerson inserts many shunts each year but he determined T.J. was a prime candidate for an alternative procedure called endoscopic third ventriculostomy, or ETV. In ETV, the surgeon, using a small video camera to see inside the brain, makes a hole in the bottom of one of the ventricles or between the ventricles to enable cerebrospinal fluid to flow out of the brain.

“The tradeoff is there’s a little more upfront surgical risk — it’s a bigger surgery — but if it’s successful then patients can be cured forever,” Dr. Fulkerson said.

Dr. Fulkerson performed ETV at his Indianapolis-area practice before bringing the procedure with him when he joined Beacon in 2018. That year he provided ETV for the first time at Beacon to nine-month-old Greyson Young.

The thought of avoiding future shunt complications appealed to the Freeby family and they quickly agreed to the ETV, but it was a lot for them to process. T.J. had never been diagnosed with a serious health condition. He’d never had surgery, let alone brain surgery. And he would be immediately admitted to Beacon Children’s Hospital from the appointment with Dr. Fulkerson to have the surgery the following morning. The suddenness of it all left the family reeling.

“At his age, he should be having the world by the tail and then all of the sudden you’re told, brain surgery,” Diane said.

Dr. Fulkerson understood the family’s reaction, but he knew that performing the surgery the next morning was important.

“We were very concerned about his imaging and thought it could be a dangerous situation, so we wanted to get things taken care of right away,” Dr. Fulkerson said. “We would have felt terrible if we said we’ll do it in two weeks, and then he comes back in a coma a couple of days later.”

The family also was surprised by how quickly and easily T.J. recovered.

“You would think at the very least there would be soreness when they have to drill through your skull,” she said. “He was back to Purdue within a week. We thought he’d have to miss a lot more school. It was this whirlwind and we just kind of looked at each other and said, ‘Did this really happen?’”

Dr. Fulkerson said he was glad that T.J. told his parents about his headaches, and that they sought medical care.

T.J. hasn’t experienced severe headaches since the surgery, except for those caused by his five older siblings, he joked. He wanted to thank Dr. Fulkerson, nurse practitioner Natalie Hauser, and their team.

“Things could have been a whole lot worse, but I’m lucky I had a good crew to help me out,” he said.

“Our family truly considers this a miracle — the timing, how all the people were put in our path, and the outcome itself,” Diane said. “Our Catholic faith sustained us during this whirlwind of uncertainty.” 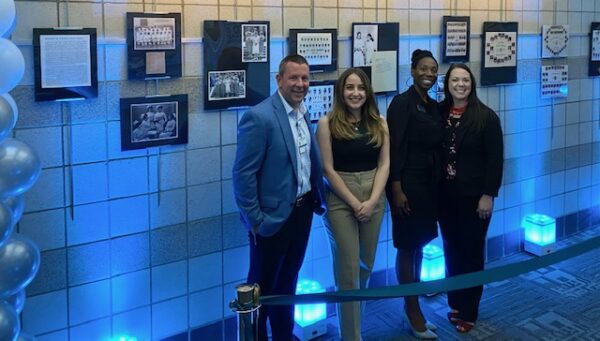