Feb 02, 2020 in Spotlight by Heidi Prescott-Wieneke

Maddilyn James Enos is going to have the best story to tell about the day she was born. 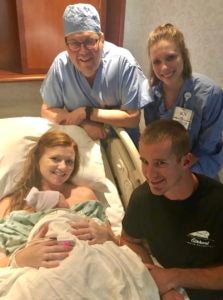 Maddie will always be able to say that people around the world took note of her birthday. 02/02/2020.

But Maddie can say this: her birthday was the first time in 909 years that the eight-digit date could be read the same forward and backward.

“I didn’t realize that today held a significant meaning until this morning when read about it on a Facebook post by the weather man,” said Jordan Enos of Goshen.

She and husband, Colton, talked about the “epic math day” on the way to Elkhart General Hospital and talked about how cool it would be for their baby to be born after 2 p.m. 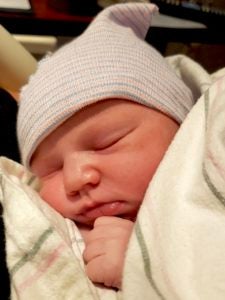 Dr. James Mauck induced Jordan at 7:45 a.m., but it took several hours before her water broke. That’s when the hospital labor and delivery team told Jordan to start pushing.

“It would have been really cool,” Jordan said.

There won’t be another eight-digit palindrome day for 101 years.

Jordan and Colton wonder if 2 or 20 might end up being Maddie’s favorite number.

Or her lucky number.

Or maybe Maddie will grow up to be a genius mathematician.

“I don’t think that will happen, based on our genes, because we are not good at math,” Jordan said. “But could it happen based on numbers? Who knows!”